Patna : Millions of people in Bihar, India, are showing symptoms of arsenic poisoning, which can be linked to cancer, due to consumption of contaminated drinking water.

The symptoms arise after many years of exposure, say experts.
The state of Bihar, in eastern India, is one of the country’s most impoverished states. More than 10 million people in the state are estimated to be threatened with arsenic poisoning or arsenicosis from contaminated groundwater.
Dr. Ashok Ghosh, a professor at the Mahavir Cancer Institute and Research Center in Patna, Bihar, has been studying groundwater pollution in the state since 2004 and says arsenic concentration has shot up in the groundwater supply of some Bihar districts since he began looking into it.
According to reports, 17 of Bihar’s 38 districts have groundwater with arsenic concentrations above the permissible limit. Hand pumps in some parts, such as the district of Buxar, have been found to have severe arsenic poisoning with concentrations above 1,500 parts per billion.
World Health Organization guidelines state that the permissible limit of arsenic in drinking water is 10 ppb, while the Indian government states it to be 50 ppb, five times higher. These districts show far higher concentrations than either limit.
Since 2004, Ghosh has tested 44,000 tubewells in Bihar and found that about 30% have water with arsenic concentration higher than 10 ppb.
Ghosh believes the signs of cancer and other ailments now showing among the populations at risk are due to their continued to exposure to this toxin.
In 2016, the Mahavir Cancer Institute registered as many as 23,000 new cancer patients, and Ghosh found that many, though not all, of these cases were linked to exposure to this toxin. Some cases are thought to be a result of tobacco chewing and smoking, he said.
“When I joined the cancer hospital, I started checking blood, hair and nail samples of cancer patients and found they have very clear-cut symptoms of arsenic poisoning,” Ghosh said. “I saw 6 and 7-year-old children coming with cancer. These children don’t chew tobacco or smoke. It was very disturbing, and I could not sleep. Slowly, I adjusted.”
Arsenic is an element that occurs in organic and inorganic compounds. According to the International Agency for Research on Cancer, its presence in inorganic compounds is highly toxic and carcinogenic.
“It is a slow poison. Symptoms appear after continuous ingestion over five to 12 years,” Ghosh said.
The first known case of arsenic poisoning in India occurred in 1983 in Kolkata, West Bengal, when a patient developed skin lesions, said Dr. Kunal Kanti Majumdar, a professor at the KPC Medical College and Hospital in Kolkata.
Chronic arsenic poisoning can lead to cancer, depending on factors such as the dose, how long it is consumed, a person’s nutrition levels and any genetic predisposition. Arsenic has been linked to various forms of cancer in India, the most common being skin cancer, followed by cancers of the bladder, kidney and lung, says Majumdar.
Common symptoms of arsenic poisoning include pigmentation and keratosis, a condition that leads to hardening of the skin on the palms and soles of the feet. Arsenic poisoning can also lead to respiratory diseases, vascular diseases, neuropathy and liver fibrosis. 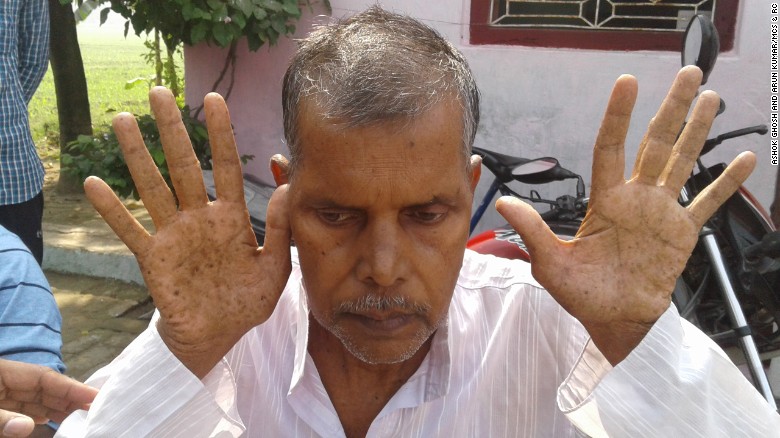 Ganesh Rai of Saran, Bihar, had acute keratosis, a symptom of arsenic poisoning. He died of kidney cancer at 58.
Before the 1970s in India, surface water from tanks, ponds and open wells was used for drinking. But since then, millions of tubewells were installed in the Ganges delta, the International Agency for Research on Cancer says, to prevent gastrointestinal diseases such as diarrhea from surface water. People soon became dependent on groundwater.
“The cause of the upsurge in arsenic concentration is the overuse of groundwater for irrigation and drinking, which happens when withdrawal rates exceed recharge rate,” Ghosh said, adding that this overuse changes the chemistry of the aquifer. “There is no law here to check excessive groundwater withdrawal.”
These changes mean arsenic — which previously occurred in a relatively harmless insoluble conjugate with iron called arsenopyrite — then split due to overuse, contaminating the groundwater with a soluble ionic form of arsenic that has since been consumed by millions of people for decades. 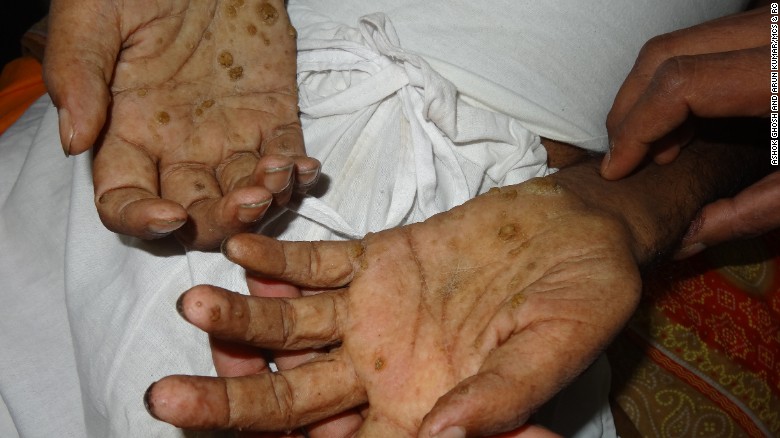 Keratosis is a symptom of arsenic poisoning.
Within India, arsenic concentration is particularly high in and around the Ganges delta in eastern and northeastern India, affecting the states of Bihar, West Bengal, Jharkhand, Uttar Pradesh, Assam, Manipur and Chhattisgarh. This is due to silt from the Himalayas containing arsenopyrite.
As a remedial measure, Ghosh simply recommends individualized testing of each hand pump or tubewell, and marking it as safe or unsafe based on arsenic levels in the water.
His team developed a color code — blue for unsafe and red for safe — and began painting some hand pumps in Bihar, but they quickly became discolored. Ghosh stated that government support is needed to systematically implement a method of discrimination between high and low arsenic sources and to educate local residents about the risks.
The International Agency for Research on Cancer says arsenic contamination of groundwater has also been found to naturally occur in countries including Argentina, Chile, Mexico, the United States, China and Bangladesh.
Source: CNN