NEW DELHI: Delhi is not the most polluted city in the world. But that’s hardly any reason to cheer. The WHO global air pollution database released in Geneva early Wednesday morning reveals that India has 14 out of the 15 most polluted cities in the world in terms of PM 2.5 concentrations, with the worst being Kanpur.

Despite public outcry over severe air pollution, and both Centre and Delhi government taking up the issue, WHO’s database of more than 4,000 cities in 100 countries shows that Delhi’s pollution levels improved only marginally between 2010 and 2014 but started deteriorating again in 2015. In 2016, the latest year in WHO’s database, Delhi was in sixth spot, having recorded its highest pollution levels in six years. The city’s PM 2.5 annual average was 143 micrograms per cubic metre, more than three times the national safe standard, while the PM 10 average was 292 micrograms per cubic metre, more than 4.5 times the national standard. 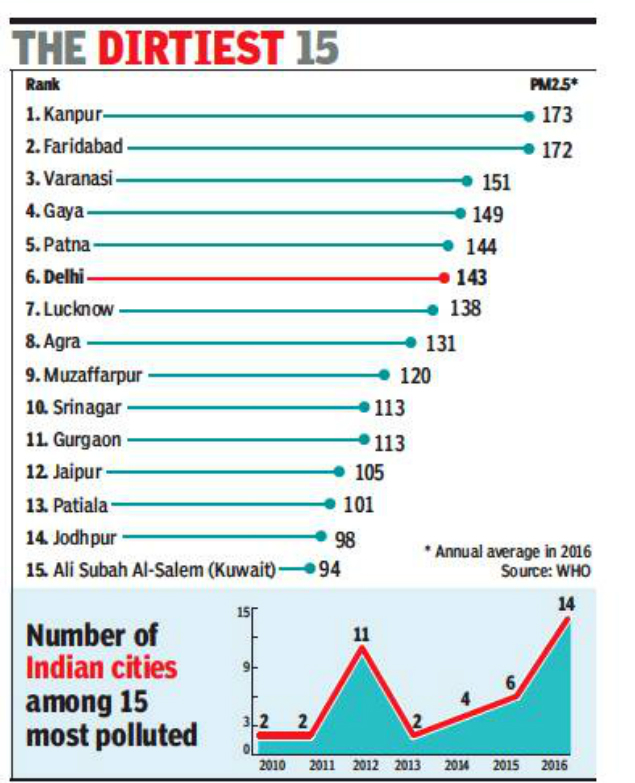 The Central Pollution Control Board (CPCB) had recently claimed that air pollution levels improved in 2017 as compared to 2016. The board, however, hasn’t released the annual average PM 2.5 concentration for 2017 yet.

A number of policies came into effect towards the end of 2016 – the graded response action plan (GRAP) in October, doubling of the environment compensation charge (ECC) on trucks in December 2015 and better coordination among NCR states on pollution control.

Delhi unable to keep pace with Beijing in bad-air fight 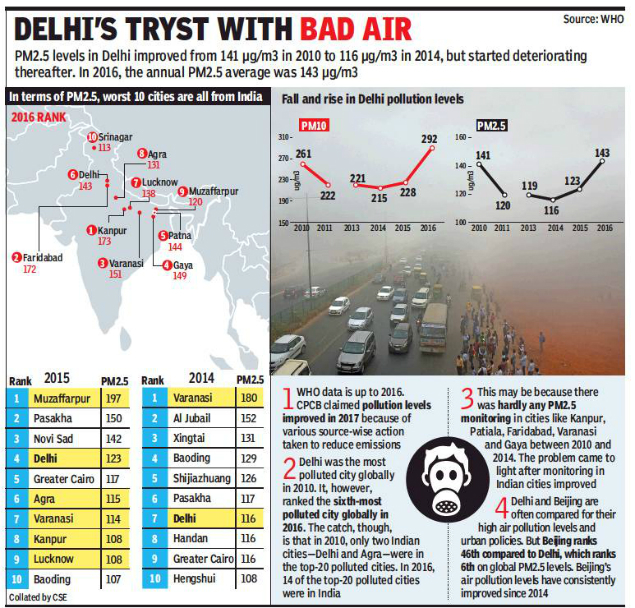 Experts Not Sure What Led To Sudden Spike In Delhi Pollution In 2015 And 2016.

The data sources for Delhi is mainly from CPCB (about 10 stations), although for the years 2015 and 2016 WHO also considered data from ministry of earth sciences (MoES) and US Environment Protection Agency’s (EPA) Air Now. This may have also influenced the air pollution concentrations for 2015 and 2016, experts said.

Kanpur topped the 2016 list with a PM 2.5 concentration of 173 micrograms per cubic metre, followed by Faridabad, Varanasi and Gaya.

Ironically, as India’s air pollution monitoring network improved in the past few years with more cities being monitored, the number of Indian cities in the top polluters’ list zoomed.

“With improved air quality monitoring, we are beginning to understand the depth and spread of the air pollution problem in India. While Delhi is at the crossroads and is expected to bend the curve post 2016, other pollution hot spots are proliferating across the country,” said Anumita Roy Chowdhury, executive director, Centre for Science and Environment (CSE).

“This is a national public health crisis and the newly proposed national clean air action plan has to ensure stringent action in all cities to comply with clean air standards,” Chowdhury said.

In 2010, Delhi was the worst polluted city globally followed by Peshawar and Rawalpindi. Agra was the only other Indian city in the top 10 polluted (PM 2.5) cities, in 2011 too Delhi and Agra were the only two Indian cities and Ulaanbaatar was the worst.

As for Delhi, experts are not sure what may have led to a sudden spike in 2015 and 2016. “In 2015 and 2016, there were northwesterly winds in the crop burning season which brought particulate pollution from neighbouring states. These meteorological factors may have also accentuated air pollution in Delhi,” said Dipankar Saha, former CPCB air lab head.