Mumbai: Seven in 10 teenage Indian girls want to finish graduation, three in four have a specific career path in mind, and nearly three in four do not want to marry before the age of 21. These are some of the findings of a new survey conducted by Nanhi Kali, a project by the Naandi Foundation, which works with adolescent girls.

While they aspire to do so much, their current status in society and at home has not significantly changed, as we will see in subsequent parts of this series–and most struggle with a variety of what the survey calls “new age skills”, such as travelling alone and asking for directions.

The survey asked girls aged 13-19 years questions on nine topics including educational and health status, basic life skills, agency and empowerment within and outside the home and aspirations.

In this first of a three-part series, we look at the aspirations of India’s teenage girls, 63.2 million of whom will be first-time voters in 2019, and analyse the factors that go into shaping their aspirations. In the second part tomorrow, we will look at where their educational status, their attitudes on empowerment and ‘new age skills’–such as using a smartphone or typing out a document on a computer in English–put them in their quest for these aspirations. In the concluding part, we will study their health status and lack of access to healthcare in a country where every second teenage girl is anaemic.

The survey also collected demographic data of the teenage girls’ households. In general, more girls in urban areas aspired to complete graduation, to take up paid work and to marry later than age 21 compared to rural areas. Girls in households with higher wealth were more likely to hold such aspirations. Further, the likelihood also rose with age, with more girls in the 16- to 19-year age group with such aspirations, than in the 13- to 15-year age group.

These variations suggest that with more exposure to avenues and with more role models to look up to, teenage girls tend to hold higher aspirations.

“I would say that to the extent that their knowledge offers them, they’re driven,” Rohini Mukherjee, chief policy officer at Naandi Foundation, told IndiaSpend. “If today they say that they want to be an IAS officer, they are simply not exposed to the information. To the extent of what they know, there is seriousness to follow the path and achieve their goals.”

India has amongst the lowest female labour force participation rates in the world. In 2015, women accounted for 23.7% of India’s workforce, according to data from ministry of labour and employment. The reasons for low participation rates include social norms, household work, skill gap etc, as our ongoing investigation shows.

“We see ‘teenage’, especially for girls, as a very important phase in a girl’s life cycle because firstly, her current state of well being has a lot of implications on whether she will become prospective citizen of the country or not,” Mukherjee said.

Ensuring 10% increase in girls going to school can increase the gross domestic product (GDP) growth by three percentage points, according to this 2014 study by United States Agency for International Development (USAID).

Moreover, every extra year a girl spends in school increases her income by 10%-20%; the return on secondary education is even higher and goes up 15%-25%.

Since women reinvest 90% of their income in their families as opposed to men who plough back less than half this amount, increase in incomes of women has proven intergenerational benefits that lift entire families and communities out of poverty, according to this 2014 study by the United Nations Population Fund.

“Secondly, and this is something that boys don’t have, is how she is today will determine the health of the children she’s going to give birth to tomorrow,” Mukherjee said. “So therefore, for us, this age group and this section of the population is extremely important, and when we found that there is no data, not just recent data but any large scale survey where she and only she is the focus, and when we found out that such a survey has not been done, we decided to do it.” 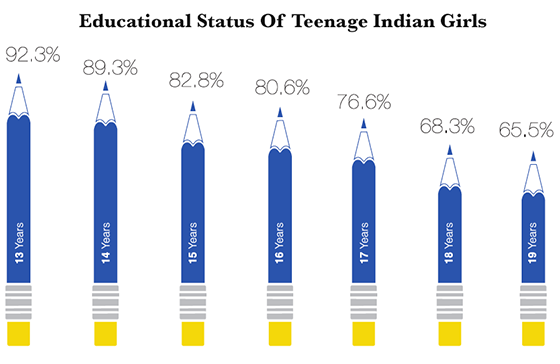 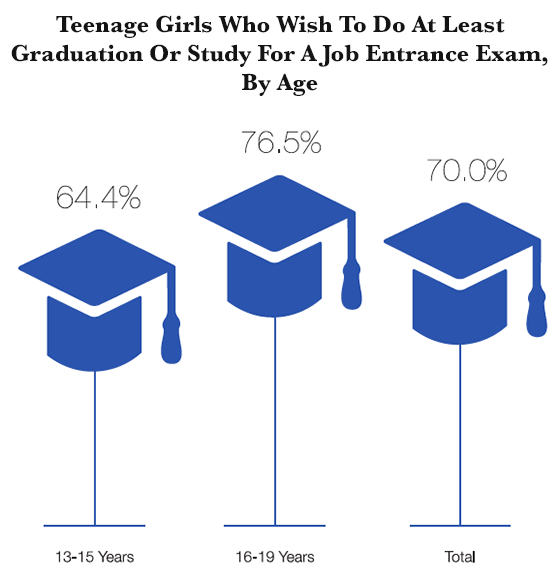 Variations were also seen based on place of residence: While 61.2% respondents in rural areas said they would like to pursue at least graduation or a job entrance exam, 81% did so in urban areas. 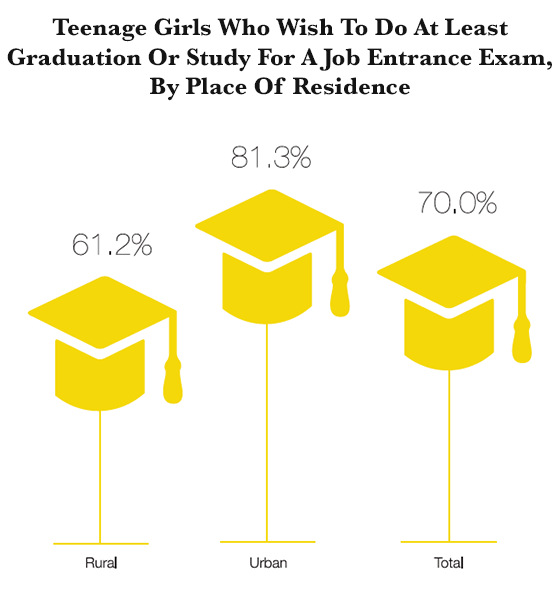 Girls with higher household wealth were more likely to aspire for higher education. Households are divided into wealth quintiles–five equal parts based on their scores on ownership of consumer goods and household characteristics, such as availability of basic facilities such as clean drinking water. 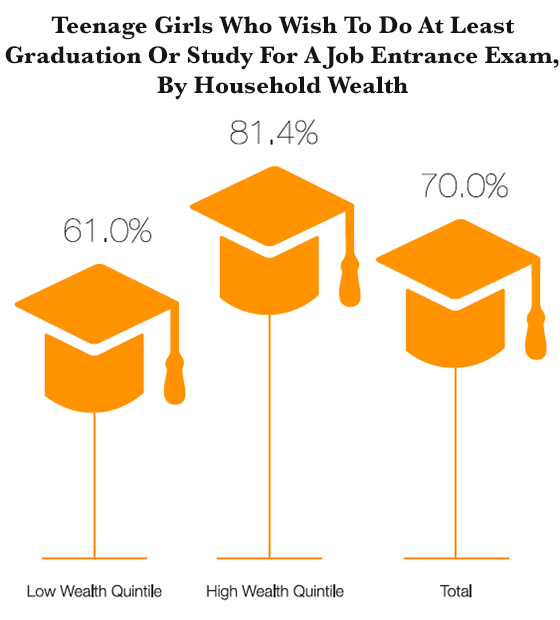 Among states, Bihar–whose state government provided bicycles for girl students in 2016 in to improve enrollment of girls in schools–had the lowest percentage of teenage girls who wished to complete their graduation (52%), followed by Jharkhand (58%) and Uttar Pradesh (62%). Jammu and Kashmir, with 90% teenage girls, performed the best. 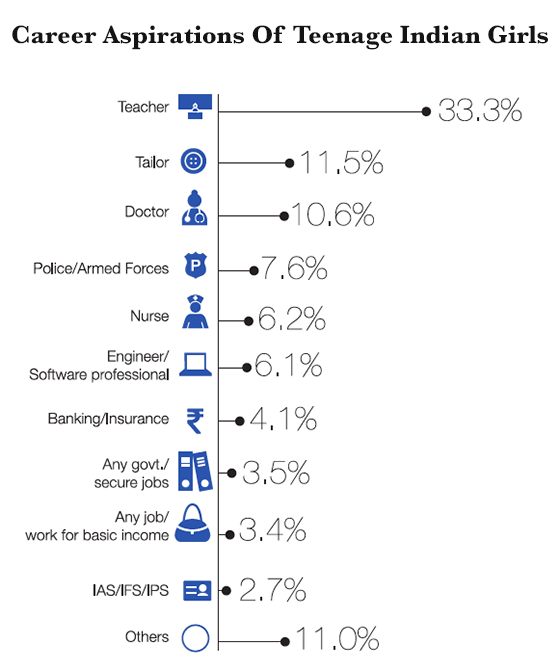 “We had questions related to “what you would like to be” and in that, their answers are stereotypical when they say teachers and doctors,” Mukherjee said. “So they are putting reality in the centre of it because she has seen role models in the form of a teacher. She has not really seen women in other professions. So here I am doubly assured that these are serious answers.”

While 72% teenage girls in rural areas had career aspirations, 80% girls in urban areas did. 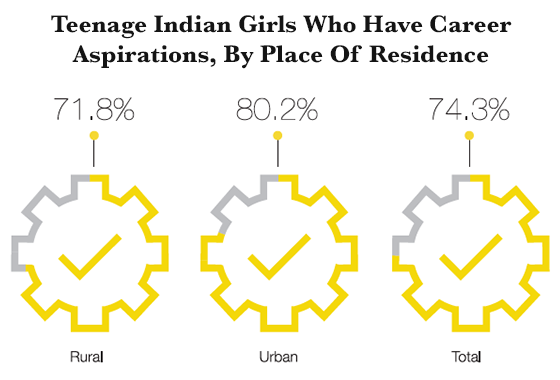 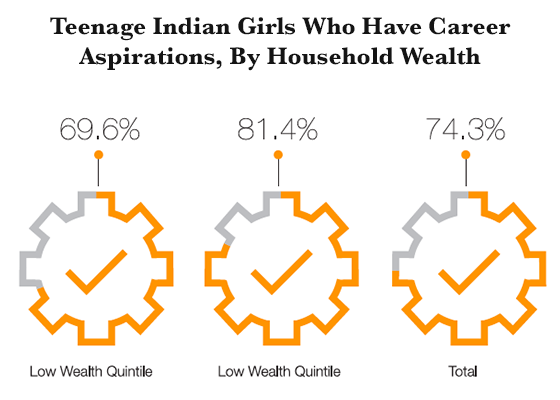 Among states, Gujarat performed the worst, with only 61% girls saying they had career aspirations, followed by Odisha (63.5%) and Bihar (67.8%). Sikkim, with 94% girls, performed the best.

In all, 73.3% teenage girls said they do not want to marry before age 21–an age by which they attain higher educational levels and would be earning a living. 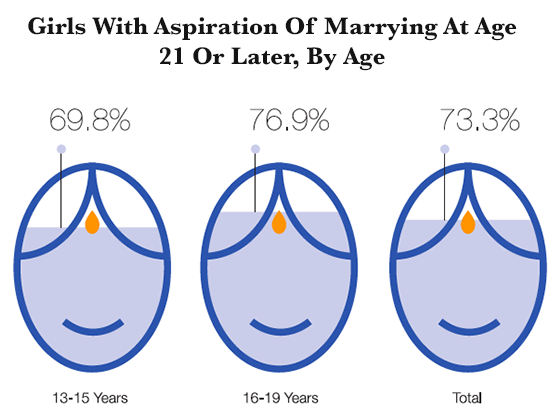 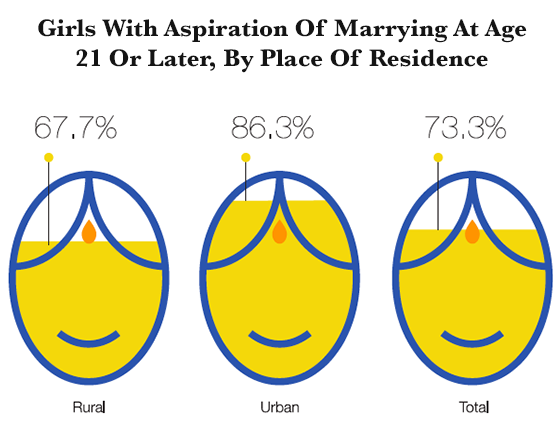 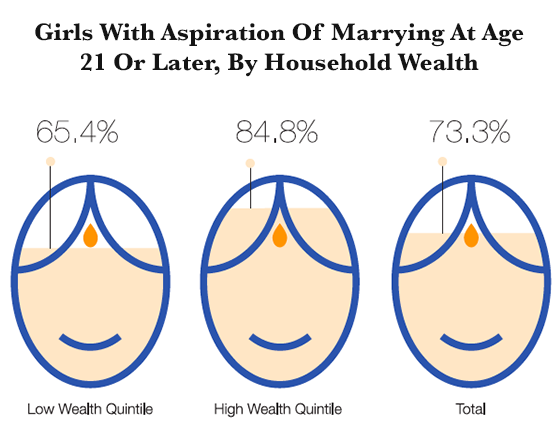 Among states, while Bihar performed the worst with only 54.7% girls saying they would like to marry at age 21 or later, Sikkim had the most teenage girls who wished to do so (100%).