The Indian economy has long been an attractive investment destination for multinational corporations. Already a large domestic market, Frontier Strategy Group’s estimates suggest the country will average growth rates between 7.4% and 7.6% over the next three years.

However, India remains a difficult market for multinational firms to enter. My conversations with executives, particularly those from western multinationals, often focus on the high cost and difficulty of doing business in India as one of the biggest disincentives for them to invest in the country.

In one illustration of these difficulties, consider that India currently ranks 100 out of 190 countries in the World Bank’s Ease of Doing Business rankings, 22 places behind China, 39 places behind Indonesia, and just nine places above Papua New Guinea. The country’s ranking in dealing with construction permits (181) and enforcing contracts (164) is particularly bad.

The main reason for the poor performance is a complex and unpredictable regulatory landscape. Inconsistent policymaking and subjective interpretations of legislation on the ground are major obstacles to business. Moreover, regulations can change from state to state, just as they do in other large nations.

If multinationals want to succeed in India, they need to understand the country’s individual states and their business environments in a lot more detail. Most companies, including the ones mentioned above, approach India as one market when they should be thinking of the different states as individual markets. After all, what works in Gujarat will not necessarily work in West Bengal.

India is a large, fragmented, and heterogeneous market. Within the country, there are large — and often underestimated — regional differences in language, culture, talent, infrastructure, and wealth, all of which lead to wide variations in business landscapes.

Indian states are often compared to individual countries. For instance, India’s most populous state, Uttar Pradesh, has a population equal to that of Brazil, and India’s most prosperous state, Maharashtra, has an economy roughly the size of Iraq’s.

Cultural variations are important. Other than the well-documented differences in language and development, demographic differences are also significant. For instance, South India is older, with higher spending capabilities and a more skilled population, while North India is younger and relatively poor. North Indians prefer speaking in Hindi, while South Indians prefer communicating in English or their respective state language. These cultural differences have a significant impact on multinationals’ talent and organizational decisions. 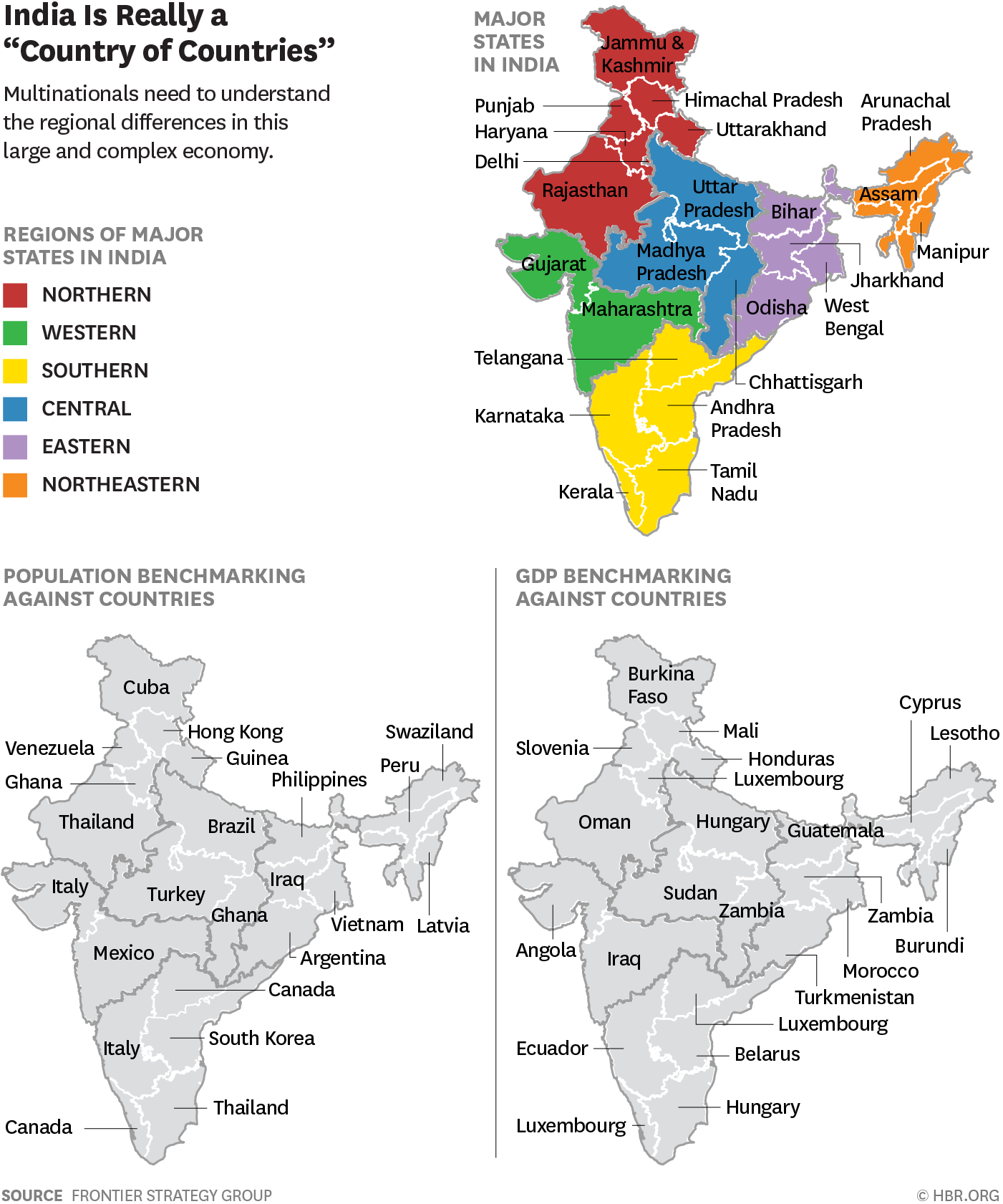 India’s federal structure also leaves certain key policy decisions to the states. Policies relating to infrastructure development, land and labor, healthcare, and transport fall under the purview of the states—as do most licensing and permitting.

This decentralized policymaking, as well as differing priorities among state governments—from rural development to improving infrastructure to attracting investment—have resulted in wide variations in the business landscape across Indian states.

For instance, a recent survey of more than 3,000 Indian companies, by government think tank NITI Aayog, reports that it takes an average of 156 days to get land allotted from the government in India. However, companies in Himachal Pradesh report that it takes 28 days for them, while those in Chhattisgarh take 213 days. Similarly, the time it takes to get an electricity connection varies. Firms across the country report it takes 52 days on average to get an electricity connection; but if you break it down by state, it takes 31 days in Karnataka, 32 days in Gujarat, and 95 days in Odisha.

We expect state policy to become even more prominent in determining the overall investment potential of the country. Competitive federalism—an approach used by the central government to encourage states to compete for investments based on economic policy and ease of procedures—is fast gaining traction. The central government is devolving power to state governments, encouraging them to make their own economic policies.

Aside from understanding how India’s states differ, companies must also create a well-thought-out plan for allocating resources across states. Most firms find it difficult to effectively compare markets and develop a structured prioritization process. Based on our experience of working with numerous companies operating in India across different industries, we find that a simple yet powerful four-step framework helps companies effectively prioritize markets in the country:

This first step allows companies to measure not only the potential in a market (size, growth, and industry clusters) but also the associated risk (market stability). This is important to get an assessment of the realistic potential of a state.

Companies should measure the operating environment of each state by analyzing indicators related to infrastructure, talent, finance, and the business and tax environment. This data is publicly available on each state’s website. Example indicators include infrastructure (such as the number of major ports), access to talent (the number of people enrolled in higher education), access to finance, and the business and tax environment and the ease of doing business.

Here is an example of how this graph might look, based on the analysis done by our company using the measures above to determine each Indian state’s opportunity and operating environment. While this may vary according to what individual companies are most interested in measuring, this is how we have categorized the states, and this is what most companies would likely find.

Multinationals need to align their India focus and strategy to the outcome. Companies can do this by categorizing the states into four groups in order of priority.

The first group of states—those with high opportunity and a strong operating environment—are category 1 states where multinationals should focus on enhancing performance. Most MNCs already have a presence in these states and executives should undertake a strategic approach to improving operations and capturing opportunity in these high performing states. For many companies, category 1 states include Maharashtra, Gujarat, Delhi, Tamil Nadu, and Karnataka, and Delhi. We recommend examining areas of geographical expansion within the states and conducting internal reviews to identify areas of operational inefficiencies.

The second category of states – those with moderate opportunity and a good regulatory environment – are states in which companies should consider expanding their presence. There are benefits in expanding to states that are geographically close to category 1 states, so we suggest a ‘hubbing’ strategy for expansion, i.e. executives should prioritize expanding to category 2 states that are relatively close to the high performing states to capitalize on cultural similarities and capture economies of scale.

The third category of states – those with moderate opportunity but a weak regulatory environment – are those where executives should monitor growth rates and explore potential as the state governments continue to improve the regulatory environment by implementing reform. Examining details of various policy initiatives aimed at attracting investment is critical for companies to determine the right time to enter these markets. Several central and eastern states fall into this category.

And finally, the fourth category – those with small risk-adjusted opportunity and a weak operating environment – are likely to be costly investment destinations for multinationals with low returns. Executives should deprioritize these states.

Often considered a country of countries, India can be a difficult yet rewarding market for multinationals. Companies that have a structured approach to prioritize India’s states can navigate the complex market effectively and make strategic decisions backed by quantitative insights. This approach also helps executives prioritize those states that are business-friendly, thereby lowering their operating costs and helping them get the highest return on their investment. Adopting a state-wise approach is key to getting it right in India.

Editors’ note: Every ranking or index is just one way to analyze and compare companies or places, based on a specific methodology and data set. At HBR, we believe that a well-designed index can provide useful insights, even though by definition it is a snapshot of a bigger picture. We always urge you to read the methodology carefully.