By Rajiv Shah
New Delhi: A top healthcare report prepared by one of the world’s most well-known consultants, KPMG, has regretted that currently 60 per cent hospitals, 75 per cent dispensaries and 80 per cent doctors are “located in urban areas, serving only 28 per cent of the country’s population”.
Sponsored by the Organization of Pharmaceutical Producers of India (OPPI) in an effort to showcase how the country’s pharma companies care for “improving” healthcare in India through “non-commercial” interventions, the report admits, “We were unable to meet the health targets under the Millennium Development Goals (MGDs) defined by the UN.”
It believes, this is because of “limited” access to healthcare infrastructure, lack of “trained” human resources and “limited” health financing options, though refusing to spell out what these “financial options” could be.
Short of insisting on going in for funding healthcare through private sector, the report does not seek to intensifying affordable public healthcare system either. It seeks to make one believe that the poor healthcare in India is caused by such “grossly neglected” factors like “health awareness and education, accurate and timely diagnosis, and adherence to, and completion of doctor prescribed treatment.” 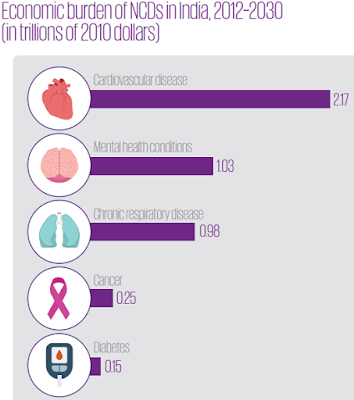 Titled “Report on Healthcare Access Initiatives”, it says, the number of hospital beds per 1,000 population in India is 0.9, “lowest among BRIC nations”, and the country has “lowest number of physicians per 10,000 population among BRIC nations”.
“In rural India, only 37 per cent of people have access to in-patient department facilities within a five-km distance” and only 68 per cent “have access to out-patient department”, the report says.
Coming to the economics of healthcare in India, the report says that “nearly 63 million people are in debt due to health expenditure” and “nearly a third of population is driven below the poverty line due to health expenses.”
This is because, according to the report, “The government funds only a third of health expenditure”, adding, “Gross Domestic Product (GDP) spent on healthcare (4.1 per cent) is lowest among BRIC countries.”
It further says, 75 per cent of the population of India is “uncovered” by insurance, adding, “Out of pocket contributes close to 86 per cent of private and 60 per cent of overall healthcare expenditure”.
The report states, in India “universal health coverage (UHC) has never been more relevant or critical, and needs to be designed factoring the rising dual burden of communicable and non-communicable diseases”.
According to the report, “While communicable diseases such as malaria, AIDS continue to be a challenge, the growing burden of non-communicable diseases (NCDs), such as cardiovascular and diabetes can no longer be ignored”, adding, “Today, NCDs account for more than 60 per cent of all deaths, and pose a potential financial burden of USD 5 trillion by 2030.”
Source: COUNTERVIEW