If the government decides to feed all its hungry people, India’s tag of a net exporting country will be easliy lost

India is riding high on the agricultural success story it has written over the past few years. Record-breaking food-grain production was registered in seven years in the past decade. From 217 million tonnes in 2006-07, the country’s production jumped to 275.11 million tonnes in 2016-17. Three years of drought, in 2009, 2014 and 2015, did not really bring production down. The government proudly concluded that the country was not only self-sufficient, but had enough to export.
It was, therefore, disturbing that the country had recorded a very high number of farmer suicides and an equally high number of farmer protests in the past two decades. Between 1991 and 2011, over 14 million financially stressed farmers quit farming.
Those who had been on an express agricultural drive, were misled into believing that their efforts were futile as the country’s production was surplus. There was price crash in the foodgrain market which forced them to sell food at throwaway prices, or just let them rot.
The fact that farmers were dumping their produce helped the government build its narrative on self-sufficiency and surplus agricultural production. Media reports and experts advocated for export of foodgrains and for setting up of more processing units to manage surplus foodgrain. India also proudly claims to be a net exporting country. This means, it exports more than it imports.

Government claims trashed
Data shows that the country barely has enough to feed its own people, let alone be self-sufficient or a net exporter. The country is home to 270 million hungry people, the highest in the world. India stands 97th in Oxfam’s Food Availability Index, and 103rd in the 2018 Global Hunger Index.
A country can be called self-sufficient only when it produces enough to meet its domestic needs. The Food Agriculture Organization has created three levels of self-sufficiency—below 80 per cent, indicating food deficit; between 80 and 120 per cent, indicating self-sufficiency; and, above 120 per cent, meaning surplus. India shows self-sufficiency, and joins the second group which includes China, the United Republic of Tanzania and Bolivia.
Government’s own data shows that the country is not self-sufficient. Ramesh Chand, member of NITI Aayog, predicted a demand of 257.70 million tonnes in 2016-17. Chand was part of a working group of the Union Ministry of Agriculture which gave a detailed report on the demand and supply balance from 2012 to 2017. The government could claim to have surplus production if it produced more than that. The country produced 275.11 million tonnes that year. This was barely a few million tonnes more than the assesed demand, not enough to meet the demand during drought.

Export in times of hunger
Let’s analyse the government’s claim of being a net exporting country in agricultural produce. The country exported 20.4 million tonnes of agricultural produce in 2015-16, and 22.3 million tonnes in 2017-18. It imported 8.1 milllion tonnes in 2015-16 and 9.4 million tonnes in 2017-18, shows the agriculture ministry data. On the face of it everything seems fine, but the country has been importing foodgrains on a large scale. Foodgrain imports indicate how insufficient the country is in staple food production. In 2015-16, foodgrains accounted for 79 per cent of the imported agricultural produce; the figure was 78 per cent the following year.
Large-scale import of wheat in 2016 is often attributed to drought years. But there has been large-scale import of edible oil and pulses as well in the past two decades.
Several parts of the country are still starved of rice, wheat and pulses. “Our tag of a net exporting country would be lost if the government decides to feed all its hungry people,” says Devinder Sharma, an agriculture policy analyst. Food availability per person has remained stagnant for the past many decades (see ‘Food availability stagnant’). The Economic Survey 2018 annual report states that the net availability of foodgrains is 487 grams per person per day. Way back in 1961, the per capita availability of foodgrains was 468.7 grams, while in 1971 it was 468.8 grams. This dipped to 454.8 grams in 1981. Net availability did increase to 510 grams per person per day in 1991, but could never rise above that. 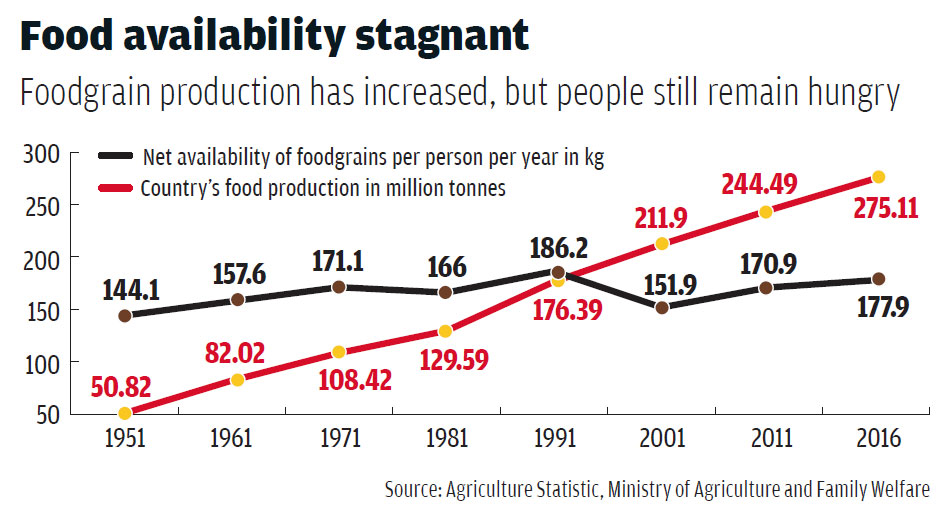 Nutritionally starved
As food accessibility did not improve over the years, nutritional intake remained disappointing. In 2011-12, there was 30 per cent gap in the actual and the recommended dietary energy intake of people living in rural India. That year, the gap was 20 per cent in urban areas.
The gap exists despite the country’s per capita income having increased almost 1,400 times—from Rs 6,270 in 1991 to Rs 93,293 in 2016. But the purchasing power of people has reduced, says Arun Kumar, who teaches economics at the Jawaharlal Nehru University (JNU). This is because of the absence of investments in the unorganised and the agriculture sectors. “In the last two decades, only 10 per cent of the country’s investment was in the agriculture sector despite 50 per cent of the rural workforce engaged in agriculture,” he adds.
Between 1993-94 and 2011-12, the mean calorie intake increased among the low income group. However, there was decline in the calorie intake among the rich households According to Chand, the increase in calorie consumption among the poor denotes improved access to food. He attributes the decline in calorie intake among the rich to changing food habits and increase in health consciousness.
“The government and a majority of the academia attribute undernourishment to diversification of the basket of consumption. That’s not true,” says Utsa Patnaik, professor emeritus, JNU. The decline in foodgrain absorption is due to the continuous decline in people’s purchasing power, she says.
Praduman Kumar, retired economics professor, the Indian Agricultural Research Institute, New Delhi correlates the decline and unavailability of cereals to severe under-nourishment. “Three-fourths of the nutrition comes from cereals and pulses.
The decline in cereal consumption did not adequately compensate the increase in consumption of horticultural and livestock products,” he says. In the face of nutritional deficiency and hunger, it is worrisome that the country’s focus has shifted from farming to imports.

Source: Down To Earth Magazine