At a recent press conference in New Delhi, India’s Defence Minister Nirmala Sitharaman surprised reporters by stating that she saw ‘no tension between the navies of India and China in the Indian Ocean’. In response to a question about a perceived ‘tussle’ for supremacy in the Indian Ocean, Sitharaman downplayed the Chinese People’s Liberation Army Navy (PLAN) threat in India’s near-seas, choosing curiously not to elaborate on the matter. 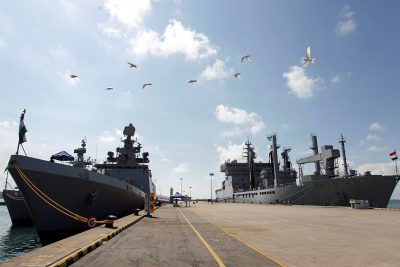 Not everyone in India’s security circles would agree with the Minister’s assessment. Over the past few years, China’s rapidly expanding naval presence in the Indian Ocean has created anxiety in India’s strategic community, where many believe China’s naval activism has shrunk New Delhi’s space for operational manoeuvre. Not only has China made inroads into India’s traditional sphere of influence in maritime South Asia; Beijing has also leveraged its naval anti-piracy deployments for geopolitical gains by promoting partnerships with regional states and advancing a ‘benevolent China’ narrative.

More importantly, Beijing has raised its strategic stakes in the Indian Ocean. It is odd that China’s anti-piracy contingents now comprise guided-missile frigates, advanced destroyers and special operations forces —contingents suited more for high-impact ‘presence operations’ than anti-piracy missions. Since the inauguration of China’s first overseas military facility in Djibouti, the PLAN’s bid for strategic access in the Indian Ocean’s critical littorals has been amply evident.

For New Delhi, the bigger challenge has come from Chinese submarines in the Indian Ocean. In recent years, Chinese anti-piracy contingents have invariably been accompanied by a PLAN submarine. In the name of counter-piracy operations, Chinese submarines have gathered critical information about the Indian Ocean’s operating environment and have spent an inordinately long time scouring the South Asian seas. The PLAN has been assisted in its endeavours by the Pakistan Navy, raising further concerns in India about an evolving China–Pakistan axis in the Indian Ocean. China’s reported deployment of a submarine in July 2017, at the height of the month-long stand-off between the Indian Army and the People’s Liberation Army in the Doklam plateau, so upset New Delhi that India’s naval leadership felt compelled to order permanent surveillance of the Indian Ocean’s critical sea lanes and choke points by ‘mission-ready’ warships.

In its attempts to maintain a favourable balance of naval power in the Indian Ocean, New Delhi has drawn close to Washington and Tokyo. The trilateral India–US–Japan Malabar exercises have grown in scope and complexity with the addition of more combat drills, but New Delhi has been strangely reluctant to expand the tent to accommodate the Royal Australian Navy. It is possible India might consider entering into other trilateral arrangements (possibly with France and Australia) before assenting to a large naval coalition in the Indian Ocean.

To New Delhi’s credit, it has stepped up its game in the Western Indian Ocean — the focal point of China’s investment and infrastructure initiatives in the Indo-Pacific region. After signing logistical pacts with Oman and France, India has strengthened maritime ties with Mauritius, Seychelles, Mozambique and Madagascar. A visit by Indian President Ram Nath Kovind to East African island states in April 2018 demonstrated New Delhi’s resolve to rise to the challenge posed by China in the Western Indian Ocean littoral.

Meanwhile, there are indications that Beijing may have been less than straightforward about its Belt and Road Initiative. The developmental blueprint is inherently ‘dual-use’ in character: Chinese-constructed commercial facilities are often structurally upgradable for military use (as witnessed in October 2014 when a PLAN submarine docked at a Chinese-constructed facility in Colombo), and the terms of agreement for port operations are almost always skewed in favour of Chinese state-owned companies.

New Delhi knows China is being smart with its influence projection in the Indian Ocean. Beijing has ensured that its warships do not threaten Indian interests in the Indian Ocean. PLAN ships have not challenged India’s sovereignty in its territorial waters and have maintained a safe distance from the Andaman and Nicobar islands. China has limited its ventures to its Belt and Road Initiative partner states, who are eager to benefit from Beijing’s economic and military assistance.

Yet there is no escaping the sense in New Delhi of a ‘slow choke’ of Indian equities in the Indian Ocean. In order to manage the India–China rivalry at sea, some analysts have proposed an ‘incidents at sea’ agreement with objectives similar to the US–USSR ‘INCSEA’ pact of 1972. While such an arrangement could indeed de-escalate a crisis arising from an accidental encounter at sea, it is not entirely clear how it would help in clarifying suspicions about strategic intent. The Indian Navy would be happy to sign up to a ‘code of conduct’ if it were to also apply in the Western Pacific, where there is an equal possibility of an India–China skirmish. But that, presumably, will not be acceptable to China.

As things stand, the Indian Navy is intent on emphasising its pre-eminent status in the Indian Ocean. Even so, the task of constantly patrolling the South Asian seas is imposing a heavy burden on naval frontline assets. The sheer magnitude of the task has led Admiral Sunil Lanba, head of the Indian Navy, to observe that even though Indian warships were monitoring the pattern and periodicity of extra-regional deployments, it is clear the People’s Liberation Army Navy is here to stay in the Indian Ocean.

It is possible the Admiral was acknowledging the putative India–China ‘reset’ in bilateral relations and the attendant need for cooperative engagement with the PLAN. Or maybe he was subtly cautioning his subordinates that they needed to do more to counter the China threat in India’s strategic backyard.

Abhijit Singh is Senior Fellow and Head of the Maritime Policy Initiative at the Observer Research Foundation in New Delhi.