Prime Minister Narendra Modi today held wide-ranging talks with the Sultan of Oman as the two sides signed eight agreements, including pacts on cooperation in the field of defence, health and tourism. 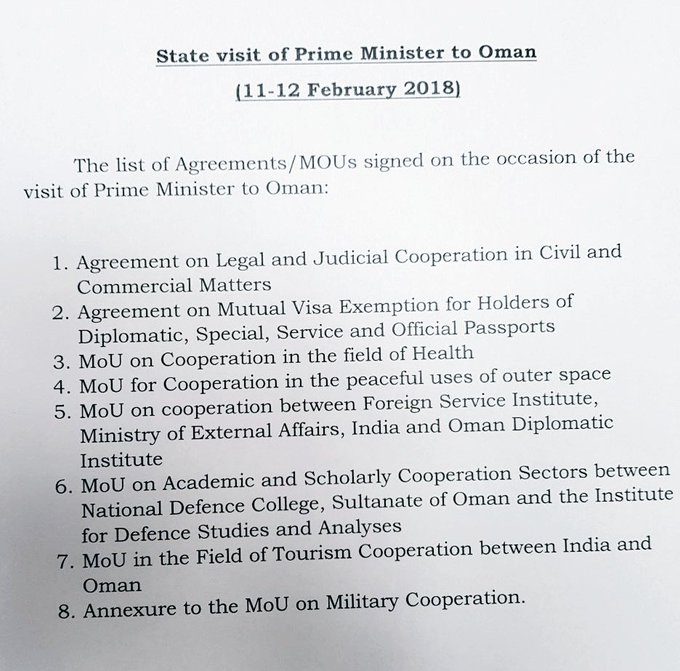 Sultan Qaboos appreciated the contribution of honest and hard working Indian nationals in the development of Oman. Eight Agreements/MoUs were also signed during the productive visit.

Sultan Qaboos appreciated the contribution of “honest and hard working” Indian nationals in the development of Oman.

After their talks, the two sides signed eight agreements, including an MoU on legal and judicial cooperation in civil and commercial matters.

They also signed an agreement on mutual visa exemption for holders of diplomatic, special, service and official passports and an MoU on cooperation in the field of health, tourism and peaceful uses of outer space.

An MoU on academic and scholarly cooperation between National Defence College, Sultanate of Oman and the Institute for Defence Studies and Analyses.

The two sides also signed annexutre to the MoU on military cooperation.

Earlier, addressing the Indian diaspora at the Sultan Qaboos Sports Complex in Oman’s capital, PM Modi said the ties of India and Oman have always remained strong despite the ups and downs in the political environment in both the countries.

He also said that Indian diaspora has played an essential role in strengthening these ties.

More than nine million Indians work and live in the Gulf region. In Oman, they constitute the largest expatriate community.

On the first leg of his trip, PM Modi had travelled to Ramallah, becoming the first Indian prime minister to make an official visit to Palestine. From there he visited the UAE, before arriving in Oman.