NEW DELHI: The gap between China and India’s prosperity+ has narrowed by four ranks since 2016 and to a quarter of what it was in 2012, according to the latest Legatum Prosperity Index, an annual ranking developed by the London-based Legatum Institute.

The upward trend in India’s prosperity is significant in view of the fact that India registered lower GDP growth following demonetisation and implementation of the GST reform in 2017. India closed in on China+ through gains in business environment, economic quality and governance, the report said.

The Legatum Institute applauded India for improving governance by legislation “that increased the ability to challenge regulation in the legal system”. The report attributed the gains in business environment and economic quality to improvement in intellectual property rights and massive rise in bank account holders. 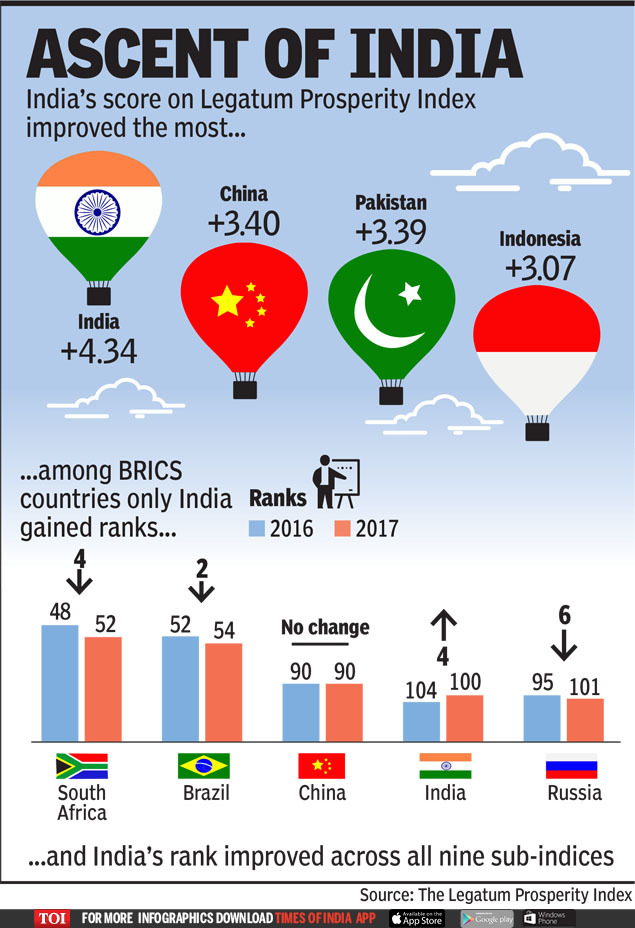 In the 2017 Legatum Prosperity Index, based on 104 different variables analysed across 149 nations, India has significantly improved in the economic quality and education pillars. “More people are now satisfied with their standard of living and household incomes,” the report said.

China, according to the report, has lost out “economically as people perceived greater barriers to trade and less encouragement of competition; and educationally through a falling primary school completion rate”.

Overall, world prosperity increased in 2017 and now sits at its highest level in the last decade even as the world went through turbulence due to terrorism, war against Islamic State and displacement of massive number of people in West Asia and North Africa. The global prosperity is now 2.6% higher than in 2007. While prosperity improved around the world in 2017, no region grew as fast as Asia-Pacific.