While the European Union has been imposing bans on Indian food products, so have some in Asia. For instance, Vietnam had banned import of groundnut

Kolkata: For long, chillies from Faklakata town in West Bengal used to be a key ingredient at traditional dishes in Bhutan.  In July 2016, the Bhutanese government banned their import, due to high chemical content.

Notably, the ban was imposed after testing in a laboratory in Kolkata, which confirmed presence of pesticide residues beyond the Codex Alimentarius Commission’s limits.

Bhutan has since lifted the ban. However, to move towards a healthy food economy, Bhutan has been more selective on food products from India. According to data from The Agricultural and Processed Food Products Export Development Authority (Apeda), compared to the first five months of this financial year (April-August) over the same period last year, India’s food export to Bhutan is down 40 per cent in volume and 15 per cent in value this year (13,139 tonnes, from 18,572 tonnes; Rs 113 crore, from Rs 131 crore. 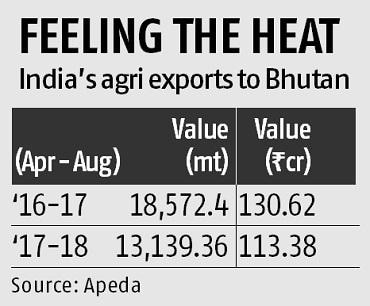 “Bhutan has been following a policy which aims to move towards healthy and nutritious food, if not organic. Farmers in the foothills in Bhutan have started growing chillies and are also sourcing it from other countries; they’re moving towards self-sufficiency in food production,’’ said Arpita Mukherjee, professor, Indian Council for Research on International Economic Relations.

While the European Union has been imposing bans on Indian food products, so have some in Asia. For instance, Vietnam had banned import of groundnut.