India’s agriculture growth in the January to March quarter of 2017-18 dipped to 4.5 per cent as compared to 7.1 per cent in the same period last year despite a bumper production largely because of higher base.

Though, the 4.5 per cent growth in agriculture and allied activities clocked during the fourth quarter of 2017-18 was highest in the year, but it wasn’t good enough to pull overall farm sector growth to over 4 per cent in 2017-18 full year.

Going forward, experts believed that if monsoon remains fairly normal in 2018 also, India might clock a 4 per cent growth in agriculture and allied activities. 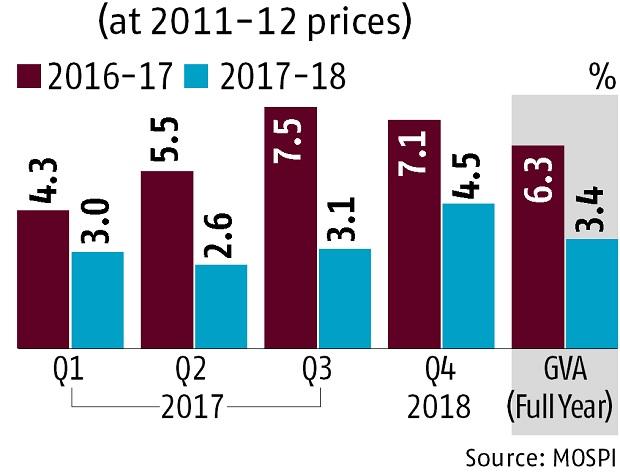 Meanwhile, the data showed that in current prices, the Gross Value Added (GVA) in agriculture and allied activities in 2017-18 was estimated at 4.5 per cent down from 11.6 per cent recorded during 2016-17. The sharp fall in GVA at current prices, also reflects the impact of inflation on farm goods which has seen a consistent fall since 2014-15 due to low farm-gate prices of oilseeds, pulses and cotton.

Falling farm gate prices has been one of major challenges for the Narendra Modi government in the last four years, which despite bumper harvest, farmers haven’t been able to reap in the benefits.

The drop in prices of major oilseeds, pulses along with cash and horticulture crops has fueled widespread farmers’ agitation in several parts of the country in 2017. The foodgrains production jumped due to a largely normal monsoon in 2017.

The southwest monsoon in 2017 was 95 per cent of the Long Period Average (LPA), which was slightly below normal. Though, the rains were deficient in around 20 per cent of the landmass, but it was largely normal in majority of the areas.

“The slump in Q4 GVA numbers and also the full year figure for agriculture and allied activities is mainly due to base effect despite that any growth in agriculture which is in the range of 3-4 per cent is good enough,” said Madan Sabnavis, chief economist CARE Ratings.