The raw numbers make for daunting reading:  In India, 190.7 million people go hungry everyday out of the current population of 1.3 billion. Crop yields are lower than those in the U.S., Europe and China, and the U.N. predicts there will be 1.7 billion mouths to feed by 2050.

It’s been quite a challenge in recent decade in Indian agriculture, starved of financial resources and continuing neglect by the government, and is likely to become more difficult over the next few decades as weather patterns, available water and growing seasons shift further. Climate change has contributed to the suicides of nearly 60,000 Indian farmers over the past three decades.

Against this backdrop, technology is increasingly being seen as a solution for boosting agriculture. In India, “agtech” startups are introducing artificial intelligence, computer vision and aerial imagery analytics to make farming processes more efficient and lead to better decisions for improving yield and productivity.

“China has almost 40% less water availability and a smaller average land holding than India, but their productivity is almost double than India. There’s a lot of scope to increase agricultural productivity in India by using technology in crop selection, package of practices and pest and disease management,” says Tauseef Khan, co-founder of Gramophone. The startup uses agronomic intelligence to provide farmers with information that allows them to better tailor what they do to crops to conditions on the ground.

“Providing inputs to farmers during their entire cropping cycle, including crop and soil management and better price realization, led to remarkable result,” adds Khan. The startup claims to have reached more than 50,000 farmers in central India’s Madhya Pradesh state, achieving increased yields of 40% for garlic.

“We work on improving the effectiveness of agriculture financing instruments by innovating on satellite big-data technology to provide regular crop monitoring of large areas for intervention and better productivity,” says Abhishek Raju, co-founder of SatSure. The system is an advanced form of a trend that has seen large farms increasingly adopt variable rate technology, to vary seeding, irrigation, fertilizing and pesticide use, according to information gathered by a variety of sensors to boost yields and cut costs.

India’s rain-dependent agriculture, although accounts for less than 15% of gross domestic product, is the main source of livelihood for almost half of its workforce. It’s a market ripe for innovation. Last year, agtech startups Skymet, EM3 and Agrostar raised $10 million each in funding rounds. There is big money, but there are bigger challenges.

“Crop pricing, credit access for machinery, frequent droughts, degrading soil quality, too many middlemen in the supply chain and lack of timely support from government are the main challenges. If agriculture is to have any chance of answering these challenges, new and improved technologies “to create better market linkages, addressing all micro and macroeconomic problems is crucial,” says Raju. 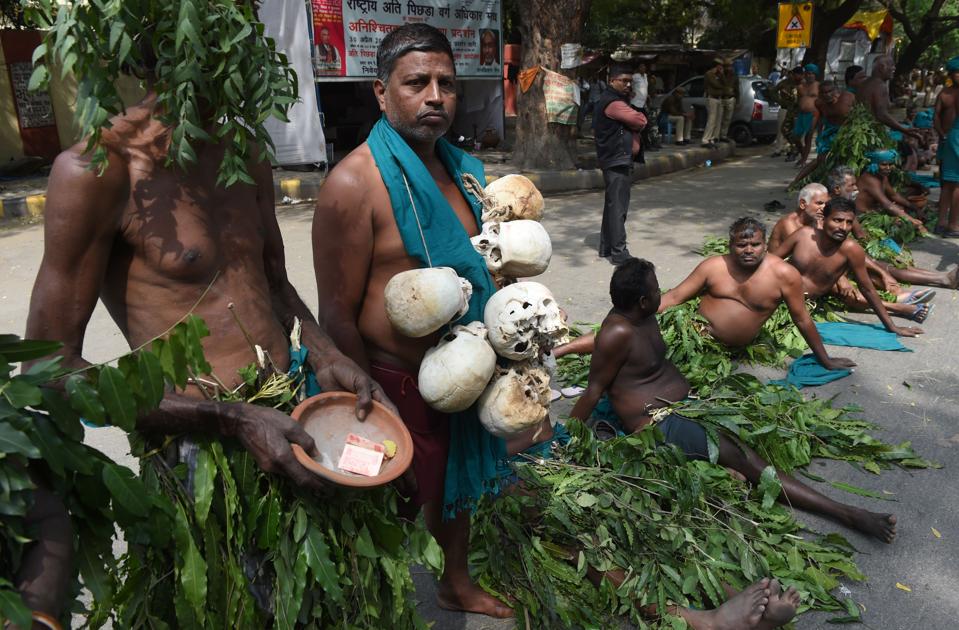 Indian farmers from Tamil Nadu take part in a protest in New Delhi on March 16, 2017. Farmers protested to demand a profitable price for their agricultral products. More than 200 farmers have committed suicide in Tamil Nadu last year following crop failure due to poor rainfall and inadequate water for irrigation.  (AFP/Getty Images)

Meanwhile, Internet usage is picking up in rural India. By 2020, about 315 million Indians living in rural areas will be connected. “Increasing Internet penetration in rural areas is the inflection point for the agtech market in India. By 2020, access to scientific practices will become easier, and current plain vanilla advisory platforms will evolve into intelligent farm management solutions accessible to the masses in local languages,” says Khan.

While nimble startups are doing clever things with technology, farmers can be among the most hidebound of managers. “Convincing farmers to apply technology to farming practices is difficult. They are not willing to make an investment, as there’s a lack of trust,” says Suvankar Mishra, co-founder of eKutir, a social enterprise providing technology-enabled farming solutions to smallholder farmers.

“To address this problem, we link first mile and last mile, connecting stakeholders in the value chain, allowing them to interact and transact, increasing economic and social capital for small farmers,” adds Mishra. “India has 120 million farmers, out of which 30 million use smartphones and have a basic sense of understanding about digital marketplaces.”

To help farmers understand the value in having weather and agronomic data, Mishra says, eKutir trains those who own smartphones and connects them with its digital platform that is designed to work in areas with limited connectivity.

“In some pilot projects we have raised the income levels of farmers by 200% and increased yield up to 170%. We aim to reach two million farmers by 2023,” he claims.

New approaches such as these can all play a role in tackling the challenge of feeding India’s rapidly growing population sustainably. However, to become solutions, ideas need funding.

According to angel investor Aniruddha Malpani, given that agriculture is highly disorganized in India, the ability of agtech startups to improve the lot of farmers and productivity is enormous. But the space is in a very unique position, presenting both “opportunities and the challenges,” he says.  “We are actively exploring investment opportunities in agtech mainly because India is still a predominantly agricultural economy, and the total addressable market is huge. Investment will not just have an impact in financial ROI, but also improve the health and productivity of farmers.”

“But since government plays such a huge role in agriculture, it’s a challenging area to work in. Also, most entrepreneurs are not willing to go into the farms and get their hands dirty, as a result lot of the work they do are not translating into tangible impact in real life,” adds Malpani.

Despite these misgivings, Indian agtech startups — nearly 300 of them — in the hunt for a sustainable farming solution to a rapidly rising population are changing the face of agriculture, one step at a time.

“With the global smart farming market set to grow at a compound annual growth rate of 13.27% to reach $12 billion by 2021, India is at the threshold as it is home to one-fifth of the global smallholder farmers,” says Mishra. “Agtech is paving new ways for Indian agriculture, especially when climate change poses risk to farmers.”

Views are personal and author’s own.