This quote from an interview with Aditi Mittal, in the book Feminist Rani, co-authored by Shaili Chopra and Meghna Pant, summed up my experience of reading it and identifying myself as a feminist. Things like agency, consent, equality in our public and private lives seem as common sense. And yet, women around the world continue to be relegated to the sidelines, sexually harassed, paid far less than their male counterparts across professions, shamed for the bodies they inhabit, judged for their actions… the list goes on, really.

Feminist Rani is a collection of interviews featuring the likes of Kalki Koechlin, Gul Panag and Rana Ayyub, Gurmehar Kaur and Malishka Mendosa to Shree Gauri Sawant and Tanmay Bhat. These are people who have advocated for gender equality and women’s rights through their work. Most of the interviewees identified feminism as the freedom to be themselves, to live their most authentic lives. What is the biggest challenge that keeps people from achieving something so fundamental in present-day India? 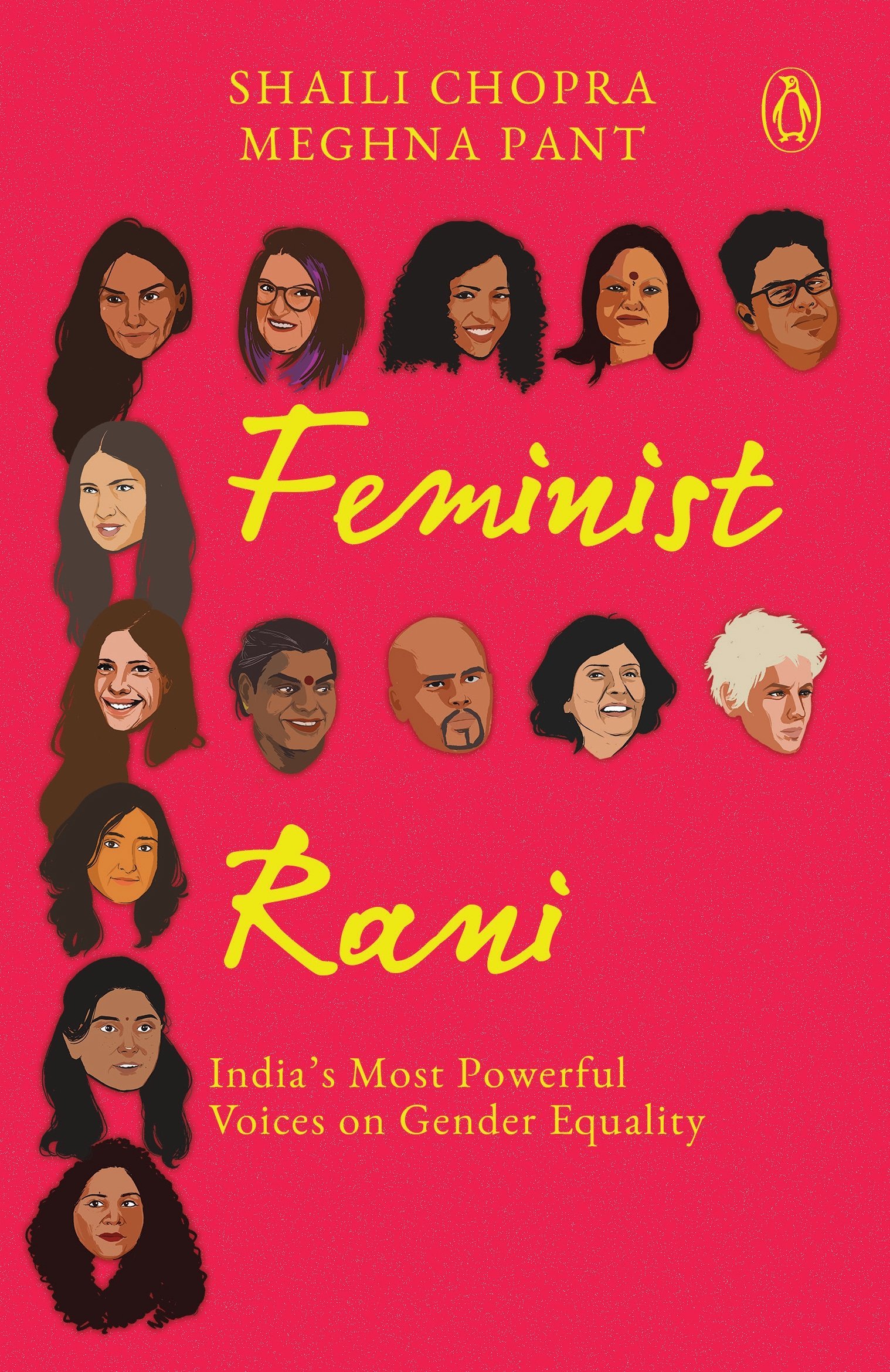 Shaili Chopra, also the founder of SheThePeople.TV, one of India’s largest digital storytelling spaces dedicated to women at work, feels that speaking up for themselves and having people believe in them is not a part of most women’s lives.

She says, “Our normative values are patriarchal and discriminatory especially when it comes to freedom of speech. The women interviewed tell us how they live on their own terms. And hopefully, the narrative of the battles they fought, how they overcame them will inspire and fire new thoughts in all those who are silently internalising and dealing with stereotypes and discrimination.”

The idea of the book was seeded in the events organised by SheThePeople.TV. Issues like feminism and fashion, body shaming, safe spaces, inclusive spaces and others were discussed with eminent speakers. The book is a culmination of the many on ground shows. Meghna Pant, also the author of several tomes of fiction, adds that the book exists because the need exists. Because unlike the West, India’s feminist history is widely undocumented, undefined and unknown.

“It’s unclear when feminism in India even began. Did it begin in religion where Indian goddesses, such as Durga, Saraswati and Laxmi, are as equally revered as the gods? Did it begin in the sexual agency of The Kama Sutra? Was it when Raja Ram Mohan Roy abolished Sati? Or when Sarojini Naidu asked for women’s voting rights in 1919? Or when Mahatma Gandhi started the Stree Shakti (women power) movement? Or when Savitribai Phule fought for caste, education and social upliftment? How can we women of India know ourselves when we don’t even know our own history, which has been conveniently documented by men? Isn’t it time we took ownership of our stories and weaved them into the history of our nation? Feminist Rani is the outcome of such repression, an answer to understanding gender issues and the role women play in modern India,” she informs.

Reasserting Aditi’s earlier point, Meghna points out that women in India exist only in binaries. She is either an abla nari or krantikaari, a devi or dayan, a virgin or a whore. This book provides context and definition and discusses everything from rape to body shaming, trolling to motherhood, sexual agency to female friendships. It debunks the stereotypes associated with the word feminism and provides a fresh interpretation. The book advocates gender equality without making it preachy or trying to be palatable to the naysayers.

“Feminism is not about preaching to the converted. It’s about inclusion, intersectionality, and accessibility. It includes everyone: women, men, children and the LGBTQI … anyone who is human! In India, 1 in 3 women are victims of domestic abuse, every hour a woman is killed over dowry, and every 14 minutes a woman in our country is raped. Feminism in India is therefore needed to defend the social, political, economic and cultural rights of women, especially in rural areas where women face ghastly social inequality and discrimination. How can these numbers alone not sensitise a human being? In fact, I don’t understand why someone would not want to be a feminist.”

The internet is like a common thread between most of the people featured in this book. While for some, it has been a tremendous cause of empowerment, the others have been viscously trolled and threatened on the web. I ask the authors how the internet can be effectively used to champion the feminist movement.

Shaili says, “I believe, in the recent times, the internet has pushed for feminism to thrive. From the wildfire-like #MeToo movement and its spread around the world to women led marches, to content focussed on women, to skilling and empowering women, the internet has opened new opportunities and new skills.”

Meghna adds that while social media and the smartphones have enabled women to speak out against discrimination and harassment, these tools have not altered their reality. Women still face hostility and doubt if they speak out. They feel that it’s always easier to remain silent – “What can be done by women, by men and by institutions to break this culture of silence and inaction? What call-to-action should be taken? How do we use social media for positive impact? How do we counter violent and extremist narratives online? The book answers these questions, using real-life examples like Rana Ayyub’s brilliant comeback to trolling.”

In the context of women championing the cause of feminism, popular activists like actress Asia Argento (one of the leading women behind the #MeToo movement) and New York University Professor Avital Ronnel were recently accused of sexual abuse. Does this put the feminist movement at a backfoot?

Shaili thinks that we need to stop making one or two examples or reasons for an overhaul of the feminist movement. She asks, “There have been hundreds of men who led Ponzi schemes but did that put a question mark on all men on Wall Street? We have had cases of impropriety but are those men behind bars? Let’s not, use a magnifying glass at a time when Argento’s story is out.”

The authors believe feminism and the feminist movement need to flourish in India. The question is, will it? Because it is really not about one person’s definition of feminism against someone else’s. And it will take consistent efforts of women supporting women, men supporting women so as to deconstruct mental barriers to our understanding of feminism.

Shaili admits, “I don’t expect a loud thud of change , but I do feel this will be a silent revolution, one progressive woman at a time.”