The Economic Survey tries to address the impact of climate change on agriculture in India.

While the nation regards farmers as “annadata” (provider of the food) and venerates them in sayings like “Jai Jawan, Jai Kisan”, the fact of the matter remains that Indian farmers, by and large, are a poor, deprived lot. The situation remains such that both in case of crop failure and surplus production, it is our farmers who bear the loss. Adding to the woes of agriculture in India is the adverse impact of climate change on agricultural production and farmer income. The recent edition of Economic Survey seeks to delve into the issue with certain policy prescriptions to wane the negative impact.

Released by Chief Economic Advisor (CEA) Arvind Subramanian, the Economic Survey report has a chapter on climate change and agriculture beginning with the Manoj Kumar starrer song Mere desh ki dharti sona ugle ugle heerey moti. The survey argues that while the volatility of agricultural growth saw a substantial decline from standard deviation of 6.3% between 1960 to 2004 to 2.9% since 2004, it still remains higher when compared to China. The volatility is caused due to extreme weather conditions and inadequate policy response to drought and excess rainfall. The data also shows that 52% of land remains unirrigated and hence rainfed.

Extreme weather outcome including extreme temperature and rainfall extremity is considered a sign of climate change which has unprecedented effect on human life. The Survey outlines that there has been a rise in the number of days with extremely high temperature and decline in low temperature days in the monsoon season over the years. Similarly, there is a steady increase in the proportion of dry days (less than 0.1 mm rainfall per day) and wet days (more than 80 mm rainfall per day) which indicates towards a deviation from normal rainfall pattern.

In term of spatial distribution, average increase in temperature has been noticed in North-East region, Kerala, Tamil Nadu, Rajasthan and Gujarat while there has been an average rainfall decrease in Uttar Pradesh, North East, Kerala, Chhattisgarh and Jharkhand.

The volatility in climatic condition which is defined in term of extreme temperature and rainfall extremity would have a clear impact on farm production and consequently on farmer income. One important finding of the Survey is that climate change would affect unirrigated areas more adversely than irrigated areas. 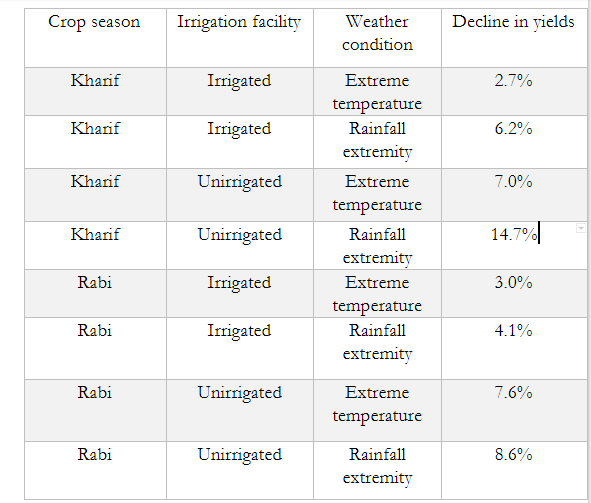 The survey also outlines that the crops dependent on rainfall like pulses are more prone to weather shocks in comparison to cereals which are grown in irrigated regions.

However, it is the estimate of decline in farmer income due to farmer income by 4.3% in Kharif season and by 4.1% in Rabi season. Based on the climate change model which predicts 3 to 4-degree Celsius temperature rise for India by the end of 21st century, the Economic Survey predicts that farmer income losses from climate change could be between 15-18% on average, rising to 20-25% in unirrigated areas. The decline in farmer income makes for a worrying case for it already remains at woefully low levels while the recent Budget announcement to double the MSP for farmers turn out to be fiscal jugglery.

The survey also suggests certain policy measures to address the issue. There is a clear case for spreading irrigation by employing methods like drip irrigation and sprinkler which would minimize water wastage in wake of water scarcity and depleting groundwater resources. The Survey makes a case for replacing power subsidy with Direct Benefit Transfer to conserve water. The idea behind the proposal is that power subsidy often leads to wastage of electricity and excess water usage while DBT would lead to judicious use. In light of uncertainty brought due to climate change, the Survey suggests widening of already implemented crop insurance schemes.