New Delhi : A change in the society can only be brought about when we change our mindset. Considering women equal by ditching the patriarchal thought of they being the ‘weaker sex’ is what modern India preaches. While promoting gender equality and feminism as a movement is the country’s motto, the findings of a recent survey conducted by Ipsos Study reflect differently.

More than 64% Indians believe that the primary role of women in a society is to be good mothers and wives while being confined at homes.

“Indian women maybe moving out of their homes, seeking employment and carving out a niche for themselves at workplaces, but society sees them more as accomplished mothers and wives in primary role, relegating other roles to secondary positions,” said Parijat Chakraborty, executive director of Ipsos Public Affairs. 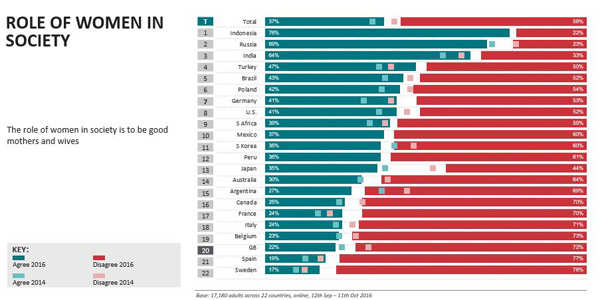 Results from the survey on the role of women (Image: Ipsos)
“Indian women cannot be seen shirking from domestic duties and winning accolades at work – at the cost of neglecting primary role that society has deemed on them,” added Chakraborty. 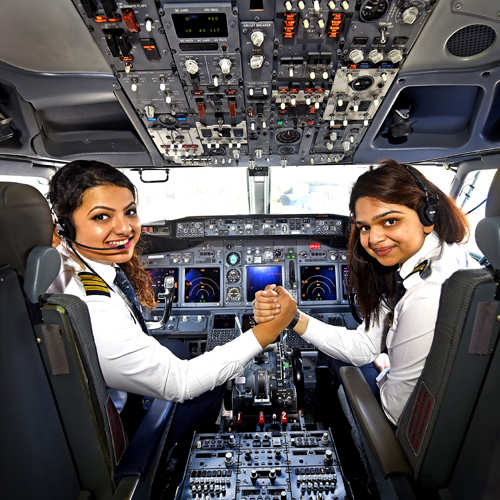 India had its first woman pilot back in 1956. Six decades on, women flying Indian planes is no longer a rare sight. Trishala Sonde (left) and Ena Patel, 22-year-old first officers with a multinational airline, came together inside a mock pit on Women’s Day with a message to inspire more womenfolk in the country to join the profession. Sonde and Patel said that being a pilot was not just a man’s job — “anybody can do it”, they said — and that it could be a motivating career for women. (Image: BCCL)

The traditional views were prevalent once again when a question was asked on whether the parents of children should be married or unmarried. 78% people said that the parents should be married, making India, the second country with the maximum number of affirmative responses after Indonesia (85%). 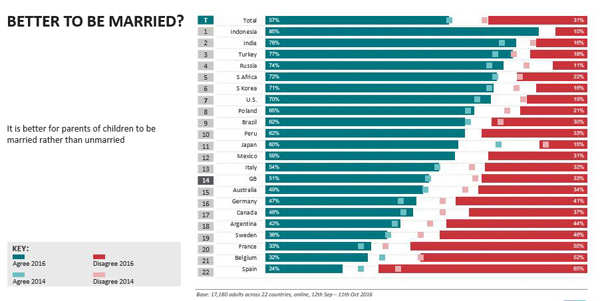 Results from the survey on whether it is better to be married or single while raising children (Image: Ipsos)

When asked that parents do not take enough responsibility for their children’s behaviour, 72% Indians agreed that it is indeed correct and felt that there is room for improvement in this department. 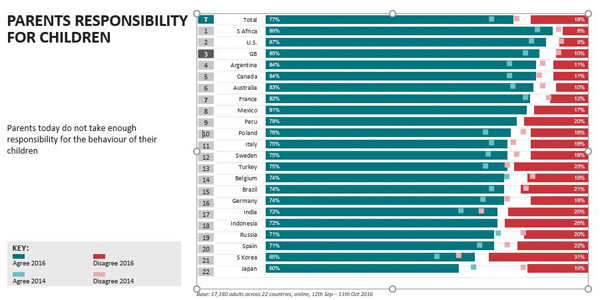 Results from the survey on parents responsibility for the behaviour of their children (Image: Ipsos)

The only comforting response in the survey was that men should take more responsibility when it comes to childcare and domestic affairs. 81% voted in affirmative that there should be equal responsibility. 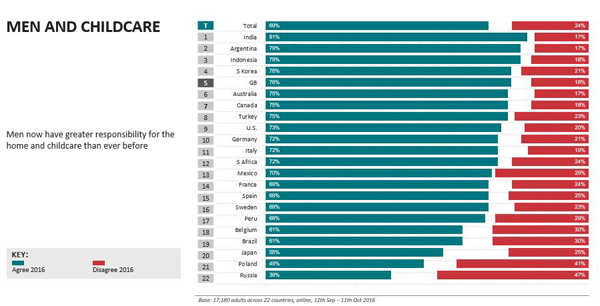 Results from the survey on men and their involvement in in household work/childcare (Image: Ipsos)