NEW DELHI: India’s growth slumped to a two-year low and the country ceded its top ranking as the world’s fastest-growing economy back to China in the March quarter, suggesting that the effects of November’s note swap were rippling through the economy. However, remonetisation, a good monsoon and possible interest rate cuts along with the goods and services tax should lead to a recovery in FY18, officials and experts said.

Singling out any one reason for the slump would be difficult, said chief statistician TCA Anant while releasing the numbers based on the revised wholesale price and industrial production data on Wednesday. “Every policy decision has an implication… so has demonetisation, but to disintegrate the impact of one decision is a complex task,” he said.

Singling out any one reason for the slump would be difficult, said chief statistician TCA Anant while releasing the numbers based on the revised wholesale price and industrial production data on Wednesday. “Every policy decision has an implication… so has demonetisation, but to disintegrate the impact of one decision is a complex task,” he said.

Chief economic adviser Arvind Subramanian said the numbers weren’t a surprise and that remonetisation and a good monsoon would perk up the economy.

India’s fourth-quarter growth slowed to 6.1% compared with China’s 6.9%. Even a revision of the base year for the index of industrial production (IIP) and the wholesale price index (WPI) failed to lift growth, which slowed to 7.1% for the full year, the lowest in two years. That was however in line with the official estimate but down from the revised growth of 8% in FY16. 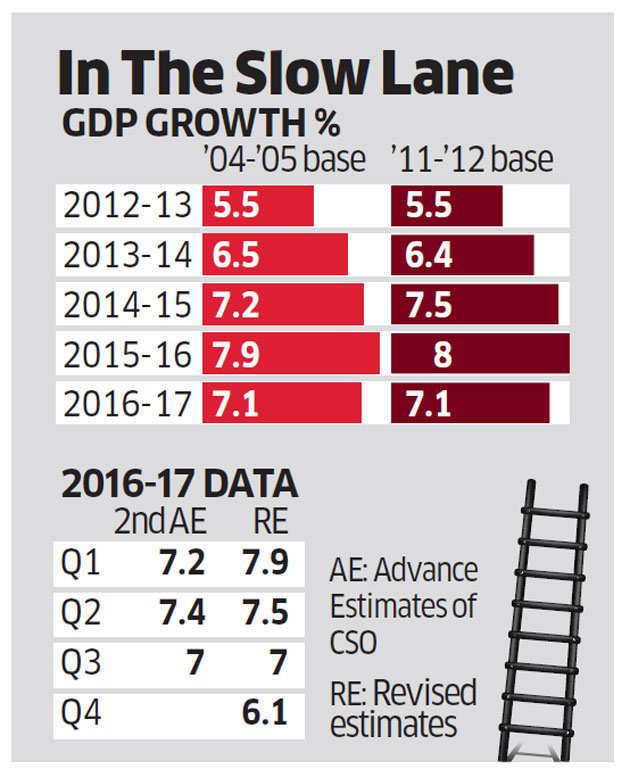 As per provisional estimates, first quarter GDP growth was revised upward sharply to 7.9% from 7.2% and that for the second to 7.5% from 7.4%. The third-quarter estimate was unchanged at 7% from the second advance estimates of the Central Statistics Office (CSO).

Subramanian said the numbers were as per expectations.

“The GDP (number) is quite expected with what we said in the Economic Survey, the demonetisation was a temporary shock, and the economy recovered with remonetisation,” he said. “GDP growth of 7.1% is a healthy economic growth number… With better monsoon projection this year, the numbers are expected to be better.”

Growth measured in value added terms rose 6.6% in FY17, revised down from 6.7% in the advance estimates as against 7.9% in FY16. GVA growth in the fourth quarter was slowest in eight quarters at 5.6%.

“The distinct downtrend in GDP growth over the quarters of FY2017 suggests that the slowdown in growth that had already set in was intensified by the note ban,” said Aditi Nayar, principal economist at ICRA.

Almost all sectors, with the exception of agriculture, showed deceleration in the aftermath of demonetisation. While manufacturing sector output in the fourth quarter slowed to 5.3% versus 12.7% in the same period last year, construction slipped into negative territory, contracting 3.7%.

Demand in the festive season and a favourable base effect appear to have cushioned the impact of the note ban on consumption growth in the third quarter, which was followed by a sharp dip in the last quarter.

MINING, CONSTRUCTION HURT GROWTH
GDP growth in FY17 was primarily dragged down by mining and quarrying and construction along with services.

“Interestingly, a closer look at the data reveals that the GVA deflator for the mining subsector expanded by a whopping 25%,” said Soumya Kanti Ghosh, group chief economic adviser, economic research department, State Bank of India, in a note. “In a nutshell, the GDP slowdown is both a pre- and post-demonetisation phenomenon.”

With the setback in FY17, experts feel the Indian economy is set to gather momentum in FY18 led by higher investment and consumption demand that will get buoyed by a cut in interest rates by the central bank.

Experts expect the current year’s growth to also get a fillip from the goods and services tax that’s set to be rolled out on July 1and normal monsoon-led consumption, private sector spending and investment.
“Since the monsoon aspect is taken care of, RBI could cut rates by 25 basis points during the course of the year,” said CARE Ratings chief economist Madan Sabnavis. “This could happen around September-October when the impact of GST and HRA (house rent allowance) impact of seventh pay commission become clear.” A basis point is 0.01percentage point.
8% GROWTH IN 3-4 YEARS
Global ratings agency Moody’s Investors Service expects India’s GDP to gradually accelerate to around 8% over the next three to four years.

“We continue to expect MPC (Monetary Policy Committee) to keep the repo rate unchanged in the June 2017 policy review, amid a perceptible softening of the tone of the policy statement from hawkish to neutral,” said ICRA’s Nayar.

MPC is scheduled to meet on June 6 and 7.

“There is indeed a discernible trend of the economy slowing rather abruptly in Q4,” said Ghosh of SBI. “Excluding public administration, the GVA growth dropped to 4.1% in Q4 (from 5.6%) and 6% in FY17 (from 6.6%). Clearly, RBI might take into cognisance such numbers in its June policy statement.”

ICRA expects growth in FY18 to remain domestic-consumption driven, with a muted rise in export volumes, moderate uptick in aggregate government consumption and investment spending besides a back-ended pickup in private sector investment, while CARE Ratings projects the Indian economy to grow at 7.6-7.8% in FY18.