Editor’s note: Water levels in India’s 91 major reservoirs, according to a Ministry of Water Resources statement, stood at 20 percent capacity at the beginning of July. This points to an impending crisis of serious proportions, and one that has already begun to impact daily life in the country, especially in North India. This muti-part series on the country’s water shortage situation attempts to investigate why India’s reserves are running dry.

A recent Niti Aayog report sounded the alarm on the looming water crisis in India. A paragraph in the report summed up the crisis: “It’s a matter of concern that 600 million people in India face high to extreme water stress in the country. About three-fourth of all households in the country do not have drinking water in their premises. With nearly 70 percent of water being contaminated, India is 120th among 122 countries in the water quality index.”

Despite being gifted with an abundance of rivers and lakes, we have not managed to harness their potential and maintain them well enough to meet our water needs. It is poor water management, not the dearth of resources, that has brought us to this point. In a predominantly agrarian country like India, agriculture uses great volumes of water. Therefore, to address the water crisis in the country, authorities must first tackle farmers’ unsustainable practices of water use.

For example, in late April, while travelling across Karnataka’s Mandya district, I came across fields of sugarcane nearly everywhere I went. Local residents said the villages I was visiting were prone to drought, and it came as a surprise that even so, they chose to grow sugarcane — a longstanding crop that requires large quantities of water (1,500-3,000 litres of water per kilogram).

As Gireesh Maraddi shows in his PhD thesis submitted to the University of Dharwad’s Department of Agricultural Sciences, 60 percent of the sugarcane growers in Karnataka suffer a water deficit that adversely affects their yield. Of those who experienced water shortages during cane cultivation, half the respondents did not take any measures to conserve moisture in the soil, the scholar noted in his research.

This is just one example of how unsustainable water use in agriculture in India has affected water resources, resulting in drought-like conditions.

It is well established that India is now producing a surplus of rice and wheat — both water-intensive crops — and dumping them in godowns of the Food Corporation of India. At the same time, it is ignoring crops such as millets and oil seeds, which require less water and can meet the growing demand at home.

In April 2016, 13 Indian states were affected by drought, with 10 of them classified as severely affected (Dhawan, 2017). All the states that were plagued by drought were the ones where water-intensive crops such as rice, wheat, cotton and sugarcane were being grown in large measure. While the vagaries of the monsoon also played a role, it cannot be denied that growing water-intensive crops exacerbated the crisis.

The most obvious instances of this are the agrarian states of Punjab and Haryana, where the water tables have plunged to alarming levels. A report in the Hindustan Times quoted the Central Ground Water Board as saying that there was a substantial fall in groundwater levels between 2006 and 2015 in 82 percent of Punjab and 76 percent of Haryana. The report cites experts as saying that earlier, farmers followed the maize-wheat or sugarcane-maize-wheat cropping pattern, but for the past four decades, they shifted to the wheat-paddy cycle, causing unprecedented exploitation of groundwater for irrigation.

To address this water crisis, Indian policymakers will have to incentivise sustainable water management in agriculture and encourage farmers in drought-prone areas to grow crops that require less water.

A majority of India’s rivers are polluted. The Central Pollution Control Board includes all our major rivers — the Ganga, Yamuna, Krishna, Godavari, Narmada, Cauvery, Sabarmati — in its list of polluted rivers. If river water is polluted, it can neither be used by farmers, nor for drinking water needs. However, in India, the water resources departments of state governments are unconcerned with addressing pollution, with their focus primarily on the expansion of irrigation, building bridges and barrages, and so on.

Take the Ganga, for instance. There is more interest from the government in building barrages in every 100-kilometre stretch of the river than in addressing concerns of water flow or rising pollution. With the Ganga, experts have noted that building sewage treatment plants to reduce the inflow of polluted waste water alone cannot address the problem of pollution as increasing the water flow in the river is critical for the pollution load to reduce.

It is well established now that the effects of climate change, such as glacial retreat and alterations in rainfall patterns, have affected the water levels in our rivers. In 2015, during a tour of the Gangotri, where the Ganga river originates, I learned that the glacier had retreated 3 kilometres in two centuries, and after 1971, the rate of retreat had sharply increased to about 22 metres a year. There has been considerable deforestation in the vicinity of the Gangotri, which added to a rise in heat, yet no river water authority has thought it fit to address the matter.

Government agencies involved in the management of water are functioning in silos, and that is posing a major hurdle in addressing India’s water crisis. There are separate departments for surface water and groundwater as well as for pollution, environment and climate change. Therefore, it is pertinent that government agencies managing irrigation, groundwater use, pollution and climate change converge under a common head to discuss ways in which these concerns can be addressed as they are inter-linked. 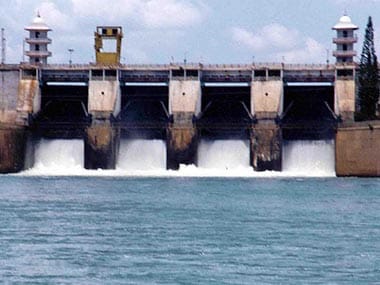 Five major rivers in India are under dispute — the Indus, Krishna, Cauvery, Godavari and Narmada. Often in the case of an unsettled dispute, such as in the case of the Cauvery, there is disproportionate sharing of river water among the riparian states, which affects dependant populations. Karnataka and Tamil Nadu have been fighting to control the waters of the Cauvery for a century now. Yet, the court battles have not provided any meaningful solution to the water-sharing crisis. On 30 June, Karnataka again said it would appeal to the Supreme Court against the formation of the Cauvery Management Authority, which an earlier judgment had made the nodal agency to resolve all disputes between the concerned states pertaining to the river.

The communities involved have paid a heavy price for depending on courts to resolve political disputes over water. In Tamil Nadu, for instance, there were three cropping seasons in the Cauvery Delta – kuruvai (June-July), samba (August) and thaladi (October-November). But due to the dwindling supply of Cauvery water, the farmers mostly grow only one crop per year now. The court intervention has only dragged on and done nothing to address the very real water crisis affecting lakhs of people.

The problem with dependence on courts is that the government’s attention is diverted away from the real solutions that exist on the ground to address the water crisis. In this case, trapping rainwater in Karnataka and Tamil Nadu can go a long way in storing water for irrigation purposes, but it has been neglected. According to rainwater harvesting expert S Vishwanath, only 23 percent of the rainwater falling within the Cauvery Basin in Karnataka is stored, while the rest flows downstream carrying valuable topsoil. Authorities have not addressed issues such as deforestation in the source area of the river in Coorg, industries polluting the river and households discharging wastewater into it, since both the riparian states are busy fighting the battle in court.

In a few years, India is expected to overtake China as the world’s most populated country. With this exploding population, our water crisis is only bound to get worse.

As the Niti Aayog report has warned, unless people are more aware of the need to conserve and preserve water resources, and the government creates incentive systems to promote such awareness, little headway can be made in addressing the problem. It is not as though dying rivers cannot be revived, as Stockholm Water Prize winner Rajendra Singh demonstrated in Rajasthan. It is only for the government to start looking at rivers and water bodies as organic life forms supporting other life, not just as a base for engineering experiments such as huge dams, barrages and interlinking projects.

A plethora of environmental issues such as groundwater mining, river sand mining, industrial pollution and the like plague our finite water resources. A concerted effort involving an active citizenry alone can save us in the years to come.

The author is a Chennai-based journalist writing on issues of development and environment. She was a senior assistant editor at The Hindu until recently and a Felix scholar at SOAS, University of London.