What’s so historic about it?

It marks an official break-away from China’s age-old GDP-centric growth model coined by Mao and Deng Xiao Ping. President Xi’s vision takes on a more conservationist approach that aims to limit economic expansion at the expense of ecosystem services losses and ramp up national environmental regulatory framework. “Great Protection” over “Great Development” was a key message perpetrated through the speech.

But what has been done so far to foster such a utopic aspiration?

By contrast, the latest Indian environmental policy move of a similar type is the National Green Tribunal Act (NGT, 2010). Other environmental reforms date back many years: The Environmental Protection Act (1986), and the Air (1981) and Water (1974) Prevention and Control of Pollution Acts. Besides anything, sheer comparison of the date of implementation of these policy interventions showcases the disposition of authorities to approach environmental issues in these two nations.

Under these reforms, China is revamping fundamental environmental quality standards for soil, air and water to meet changing aspects of pollution. Against dynamic policy approaches that capture green development right at their core, India still sticks to dated norms, unmindful of the emergence of newer pollutants, their spread and severity of health impacts.

Environmental protection policies have become harsher in China with specific mandates to enact source control measures. Punishments for environmental violations have been ramped up. Under the latest Environmental Protection Law (EPL, 2015), five key pollution control measures are outlined: daily fines towards offenders; seizure of polluting equipment and/or facilities; orders to limit or halt production in case of excessive pollution; for serious violations which don’t yet constitute a crime, polluters may face administrative detention; for suspected environmental crimes, polluters will suffer judicial sanctions.

In 2016 alone, there were in total 22,730 cases that were subjected to at least one of the above five measures. Of these cases, seizure of equipment/facilities accounted for 44%, production limits and halts 25%, administrative detentions 18%, criminal charges 9% and daily fines 4%. Between 2014 and 2016, the People’s Court heard over 300,000 environment and natural resources-related cases, 2.5 times the total number during 2002-2011.

In 2016 alone, courts accepted 133,000 civil cases related to environmental and resources issues. It was more than the decadal total, from 2002 to 2011. During January-September 2017, the number of daily fines rose by 57%, compared to the same period in 2016, garnering over RMB 960 million in fines. Concurrently, enforcement on disclosure has made significant progress: In 2016 alone, 115 environmental impact assessments were disqualified by the Ministry of Environmental Protection.

Prevention of water pollution in China

Supporting this endeavour, a revised Water Pollution Prevention and Control Law was introduced earlier this year. Under this law, party and government leaders are made responsible for addressing water pollution, including resource protection, waterline management and ecological restoration. The new law will fine those who fail to comply, reaching even up to RMB one million. For severe violations, shutdowns and criminal punishment can also be imposed. The law requires enterprises to monitor water pollutants and on failure to comply, can face penalties of up to RMB 200,000.

The Plan sets out time-bound environmental compliance targets for water quality – making 93% and 95% of all drinking water sources fit for human use by 2020 and 2030, respectively. Ten categories of industries are identified in particular, for their demonstrated impacts on water quality, comprising paper and pulp, leather, textile dying, dyes production, coking, sulphur smelting, arsenic smelting, oil-refineries, electroplating and pesticide production. On failure to meet the wastewater regulatory targets, the Plan authorises the provincial regulatory bodies to shut down the operations of these industries.

River Chief: A major adjunct of this new law is the River Chief mechanism, targeted to combat river water quality problems in particular. By 2016, it was made official nationwide by the General Office of the State Council and the CPC Central Committee. The underlying idea was to minimise conflicts between different governmental departments and foster collaborative effort by discretely laying out the roles and responsibilities of each. By the middle of 2017, China had already established 200,000 River Chiefs. Over time, the River Chief has delivered water pollution management in Zhejiang, Liaoning, Nanjing, Hefei, Tianjin and Qingdao – places infamous for pollution and human health hazards.

Such creative measures are still absent in India. A report by the Central Pollution Control Board (CPCB) indicated that between 2009 and 2015, out of the total 445 rivers monitored by the Board, the number of polluted rivers increased from 121 to 279. Over the same period, polluted river stretches have jumped from 150 to 309. Maharashtra (49) leads the tally with the most number of polluted stretches, followed by Assam (28), Madhya Pradesh (21), Gujarat (20), West Bengal (17), Karnataka (15), Kerala (13), Uttar Pradesh (13), Manipur and Odisha (12 each), Meghalaya (ten),and Jammu and Kashmir (nine). 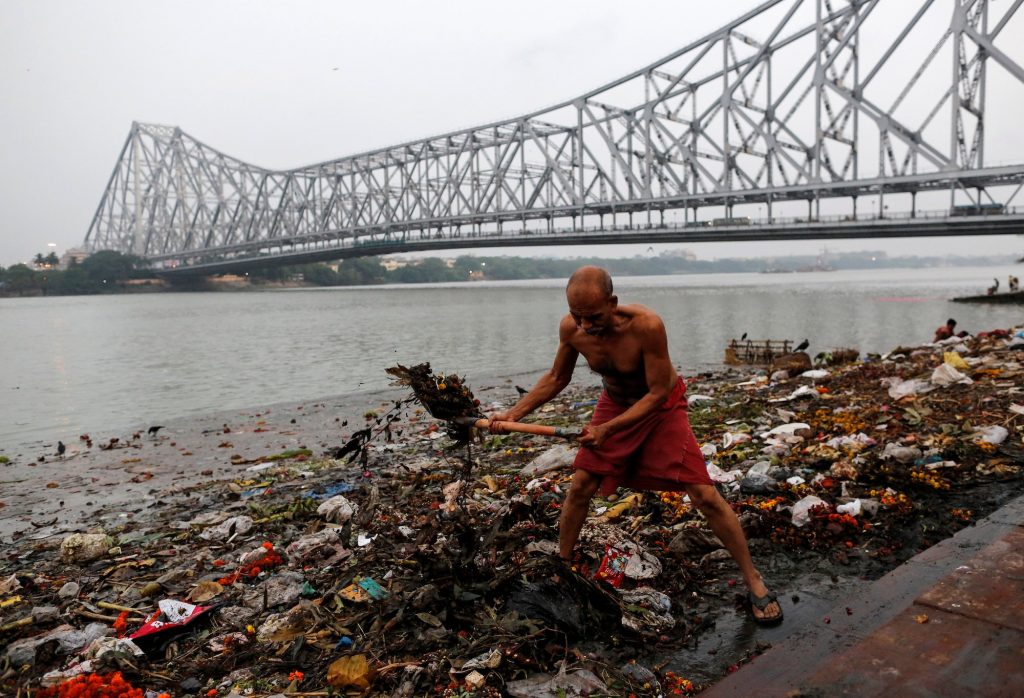 A man cleans garbage along the banks of the river Ganges in Kolkata, India, April 9, 2017. Credit: Reuters/Danish Siddiqui

A dire need for urgent government intervention and project implementation has been emphasised by the CPCB officials themselves, as much as by numerous NGOs and the general public. But what has been done so far? For example, what is the current status of the Clean Ganga Mission? Major polluters of the river include industrial effluent (tanneries, paper and sugar mills and distilleries) besides unregulated sewage disposal without treatment.

While municipal waste disposal is a major polluter for most river reaches in India, including the Ganges, sewage treatment plants (STP) on or close to riverbanks are far from operating at full capacities or have already been shut off owing to financial drawdowns. As a result, a bulk of the untreated sewage load makes it directly to the water endangering aquatic biodiversity as much as drops in potable water quality. The Yangtze River in China faces similar woes. But while China shows resolve, black-listing and shutting down several ‘types’ of industrial operations along the bank, India still stays inexplicably indecisive.

For example, the Chinese Council has issued red alerts specifically against eight heavy polluters (‘Hateful 8’) – non-ferrous metal extraction and processing, non-ferrous metal smelting, oil exploration, petroleum processing, chemicals, cocking, electroplating and tanning. The alert came upon as part of the Soil 10 Plan originally, which is actually but an extension of the Water 10 Plan and shows the great resolve of enforcing regulatory actions in a highly coordinated fashion. Most importantly, the alerts were issued regardless of what it meant for the GDP. And this is exactly what President Xi underlined with his speech: “Protection before Development”. Such punitive action is unimaginable in India, given the political volatility and craving of politicians to win populist mandates.

Moreover, efforts to marry different departments of environmental policy-making is gravely lacking. Most cases, policies are developed in isolation. Meaning, policies of one sector seldom take into consideration that in others. As a result, pitfalls in one, often, spill over onto the other, undermining both in effect. Issues of water and soil can/should never be judged in mutually exclusive fashion. Quality issues in one almost always draw from that in the other. It’s time we realised it.

While China seeks every possible means to revitalise its environmental protection system, the environmental outlook in India still remains pretty vague at the authoritarian level. The past few years have seen China making a vigorous push to move from their age-old pro-development now to a pro-conservationist paradigm, underpinned by President Xi’s historic speech at the 19th party congress. Such official dictum is strangely missing in India as environmental policy debates toddle through the quagmire of petty legal clauses.

For example, the National Green Tribunal (NGT) is presently the main (and probably the only functional) regulatory agency for protecting the environment in India. However, with the present establishment, it faces multiple hardships that practically bar it from implementing any stringent policy norms. At the very fundament, the credibility of the personnel serving on such critical agency and their mode of functioning is under question. For example, under the provisions of the NGT Act, the qualifications, terms/conditions of services are prescribed by Parliament. However, under the recent Finance Act of 2017 (Section 184), the qualifications and terms of service have largely been left to the government to decide instead. Keyed to that, the credibility of government-appointed NGT board members (especially the chairperson) has been questioned. For example, they need not be a judge of Supreme Court or high court. Concerns have been raised that such members may only serve the government’s agendas.

Under the newer circumstances, the NGT was practically made subordinate to different ministries. The members are no more to be chosen by a committee headed by a judge from the Supreme Court but by secretaries from different ministries. In addition, under the new tribunal rules, a member of the NGT can be removed by a committee constituted by the Ministry of Environment and Forests. Moreover, the NGT’s decisions are being challenged in various high courts under Article 226 (High Court’s power to issue writs). All these have largely immobilised the NGT, rendering it barely capable of supervising or implementing the orders and thus providing true environmental justice.

Last but not least, the lack of a public participatory framework is a major hindrance to implementing environmental regulations in India. Ironically, this is the very foundation upon which the EPL builds up in China – an active alliance between government bodies, judicial organisations, corporations, environmental NGOs, grass-roots community organisations, the media and individual citizens. It was time we realised playing blame games among government agencies and public, dumping responsibilities on each other, discovering newer loopholes in the regulatory framework, or downscaling the budget for environmental conservation/restoration will ultimately get to us. Or worse, our next generation.