Gasification of rice straws can solve the problem of air pollution, and with it many others, if only the government was willing to employ it.

Delhi’s air pollution has reached a level of severity where alarm has turned into panic.

Every morning the city’s citizens wake up to a dark grey sky. But these are not clouds: take a flight to Mumbai and at 3,000 feet you will burst into a crystal blue sky. On the ground, visibility is down to between 100 and 200 metres and the air smells of smoke. Children waiting for school buses, or those forced to live in slums, cough and sneeze in the frigid, poisonous air.

Every day for the nearly two weeks, the air quality index has been between 400 and 478 – more than eight times the permissible maximum. By contrast, it is currently 16 at Ooty, Wellington and Coonoor in the Nilgiris, and not much higher in Shimla and Kasauli. But only the rich and the retired have the privilege of escaping to these havens in the mountains or by the sea.

The threat air pollution poses to people is increasing, but contrary to what some environmentalists would have us believe, it is an unequally distributed threat. If you are in your teens or your 60s, if you are healthy, active, do manual work or play sports – and don’t smoke – the impact is minimal. It is children below five or six and older people – those who are frail, prone to asthma and coughing – who face the most risks. Both the very young and the elderly cannot be treated with antibiotics, or for very long, without causing complications. So the smog prevents their lungs from healing and turns them into factories for bacteria. Pollution kills mercilessly at both ends of the spectrum of life.

Until as recently as a year ago, environmentalists were blaming urbanisation, incessant construction, the rising number of cars and two wheelers, lengthening traffic jams, Diwali firecrackers and the burning of garbage for most of the pollutants that now regularly hang in the Delhi air. They were only partially right, for the annual shadow of smog arrived in Delhi last year a week before Diwali. This year, Diwali came a month early, on October 19, and thanks to the Supreme Court ban relatively fewer firecrackers were let off in the capital. But still the smog came on October 30, almost exactly the same day as last year.

Delhi residents think this smog is their special problem, and the scores of environment watchers who have raised Delhi to the top of their lists encourage them to do so. But this smog is now a problem for northern India. The trail of cancelled flights, severely delayed trains, and the multiple car crashes on the Yamuna Expressway last week showed that visibility was as poor hundreds of miles from Delhi. In fact, a blue shadow of smoke hangs across the whole of northern India every year from late October until the winter rains finally come – if they come.

This new and deadly threat has been created by the burning of millions of tonnes of rice straw in the fields of Punjab, Haryana and western Uttar Pradesh after harvest. A product of the Green Revolution, it is the price we have been paying for the country;s food security. So it is hardly surprising that no one, either in Delhi or in Punjab, knows what to do.

Chief minister Arvind Kejriwal met Haryana chief minister Manohar Lal Khattar and asked him to enforce, and if necessary raise, the fines on stubble burning as an immediate measure. He has also been trying to meet Punjab chief minister Amrinder Singh, but to no avail. But even if both Punjab and Haryana agree to penalise stubble burning more harshly, it will have little or no impact. If farmers cannot remove the stubble from their fields soon after harvesting their paddy, they will not be able to sow the wheat crop. The dilemma they face was highlighted by the Aam Aadmi Party’s own party chief in Punjab, Sukhpal Singh Khaira, when he defied the state government’s order and ceremonially burnt crop stubble on October 15.

In Delhi, there is an impression that the stubble that is left after the crop is harvested is the only problem. Based on this, there are proposals to deploy rotary root stubble digging machines to plough it back into the soil and enrich it. But stubble is the least of the problem; the greater is the rice straw and husk left behind after threshing and milling. Punjab harvested a colossal 18 million tonnes of paddy in 2016, but with it came 34 million tonnes of straw and husk. Since rice straw is no longer fed to cattle in Punjab and Haryana, it too is being burned. 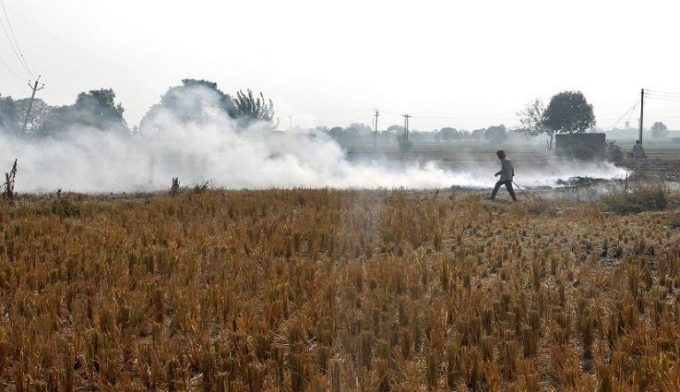 A man burns paddy waste stubble in a field on the outskirts of Chandigarh, India, on November 8, 2016 [image by: Reuters/Ajay Verma]ng

The only way to avoid burning straw and stubble is to find another use for the crop residue. Fortunately, there is a way; gasifying the straw and stubble in a two-stage process that yields a fuel gas that can be used for cooking, heating and power generation, and any type of transport fuel.

Gasification is the incomplete burning of biomass or coal in a limited supply of air or oxygen. While full combustion yields only large amounts of carbon dioxide, gasification yields a substantial amount of hydrogen, carbon monoxide and methane.

Two other chemical processes called the Fischer-Tropsch synthesis and the water-gas shift reaction, which have been in use for more than a hundred years in the petro-chemicals industry, can convert this mixture into any type of transport fuel – from CNG to diesel, methanol and aviation jet fuel. They can also produce dimethyl ether, which is a heavy condensate gas that can effortlessly replace LPG as a cooking gas.

The technology chain described above has been perfected to the point where it is now possible to convert any form of biomass – from urban solid waste to crop residues – into transport fuels. In 2011, British Airways signed an 11 year purchase agreement with a US-based company, Solena fuels, to set up a plant outside London that would convert 575,000 tonnes of London’s municipal solid waste into aviation turbine fuel every year.

Three other airlines signed memoranda of agreement with the company to do the same. But those, and several other projects that were in the pipeline in Europe, went into cold storage in 2014 when oil prices crashed. But earlier this year, a Texas-based company, S.G Preston, signed an agreement to provide Quantas Airlines with 800 million gallons of aviation turbine fuel a year, obtained from biomass.

In India, the large-scale induction of this technology could not only end the annual invasion of smog, but greatly increase farm incomes and save the country valuable foreign exchange. It can therefore solve a multiplicity of problems: give urban solid waste a value and get it off the streets, stop the burning of straw and stubble, give farmers a valuable ‘lean’ gas to use for cooking and generating electricity, and provide them with biochar – a solid, carbon-rich residue that they can briquette and sell to large scale modern bio-fuel plants planned for Europe and the US.

Biochar is 70-80% pure carbon and contains no sulphur. It is similar to superior varieties of imported coal and will fetch a similar price. At present, India is importing coking coal for blast furnaces at Rs 22,300 per tonne. If farmers can get half that price for their biochar from bio-fuels plants, they will add Rs 20,000 to the Rs 70,000 that they gross from every hectare of land under paddy.

Finally, it will save foreign exchange. Punjab, Haryana and western Uttar Pradesh produce close 45 million tonnes of rice straw and stubble. This is sufficient to produce between 15 and 20 million tonnes of transport fuels. The reduced dependence upon oil imports will convert India’s 1.5% balance of payments deficit into a comfortable surplus.

These are not the same kind of over-the-horizon technologies continuously being proposed by high-tech global corporates but tried and tested ones – some of which the Indian industry is already familiar with. The technologies need only a stable transport fuel pricing environment to take off. India could, for just this once, be a pioneer in providing an enabling price and marketing environment instead of being the eternal laggard it is today.

Prem Shankar Jha is a senior journalist and author of several books. His most recent book, on combating climate change, Dawn of the Solar Age: An End to Global Warming and to Fear, is being released by Sage Publications next month. He was a member of the Energy Panel of the World Commission on Environment and Development, 1985-88.