All the practitioners of sustainable development are being subordinated by the forces of Hindutva.

Is environment standing in the way of development? Some say yes, others say no, and a few think it is an incorrect statement of the problem. Prime Minister Narendra Modi has said that India is committed to protecting the environment. He has also pronounced that the National Geographic Greendex Report – in a survey of 18,000 consumers in 18 countries in 2013 before his government was formed – ranked India at the top for greenest consumption pattern. Then his government-issued notifications modifying rules for multiple areas of development: so much so that India is now down to 177 in the Environmental Performance Index even as it has zoomed upwards in the Ease-of-Doing-Business Index. And recently, UNEP has bestowed on him and French President Emmanuel Macron the 2018 ‘Champion of the Earth’ award for their leadership in the promotion of solar energy. So what exactly is our honourable PM championing?

One of his government’s premier initiatives has been the Swachh Bharat Mission; so we can take that as an example of his priorities. Perhaps it would help to also see the notion of ‘swachhta’ (or cleanliness) within some historical context. When the Treaty of Allahabad was signed in 1765, between the Mughal Emperor Shah Alam II and Robert Clive of the East India Company, marking the beginning of British rule in India, a courtier in the Mughal court is reported to have said, “What honour is left to us when we have to take orders from a handful of traders who have not yet learnt to wash their arses?” The concept of a clean bottom embedded in his rueful observation leads us to rapidly industrialising England of that period when London became a city of imperial splendour. That is also when the practice of indoor defecation into chamber pots began in the houses of the wealthy. At night the contents of the chamber pots would be thrown out of the windows onto the streets to keep the home clean.

By 1830, there was the inevitable outbreak of cholera in London from the excreta lying in the streets and ‘muck-men’ were hired to carry off the excreta in wicker baskets to keep the street clean. The excreta was thrown on the banks of the river, which would rise and recede with the tides, leading to its anaerobic (absence of oxygen) decomposition. This led to the Great Stink of 1860 that penetrated deep into the halls of parliament. Outraged members immediately passed laws to control the smell and that is how the modern technology of ‘sanitation’ was born. The excreta was now mixed with water and led off into underground sewers that were laid in the beds of small tributaries of the Thames. These sewers would discharge their loads into the Thames downstream of the city, and in 1880 the engineers had to build sewage treatment plants at the outfalls of the sewers to keep the river clean. By 1960, the Thames was ‘dead’ once again and the government had to build more treatment plants and longer sewers to release the effluents at the estuary and make the sea dirty.

In 1889, Mohandas Gandhi reached London to study law, and was greatly impressed by the sanitary process that made faeces ‘disappear’. As he was to say in 1925, “I learnt 35 years ago that a lavatory must be as clean as a drawing room. I learnt this in the West… The cause of many of our diseases is the condition of our lavatories and our own bad habit of disposing of excreta anywhere and everywhere. I, therefore, believe in the absolute necessity of a clean place for answering the call of nature,” and that “the habit has become so firm in me that even if I wished to change it I would not be able to do so.” But that did not prevent him from challenging the equally ‘firm habits’ of others in 1935, stating, “The wonder is that in spite of this sinful misuse of village tanks, villagers have not been destroyed by epidemics.” By “sinful misuse” he was referring to the practice of outdoor defecation and its health impact on village tanks. Now he and his spectacles have been put to work to make Bharat ‘swachh’ by building toilet after toilet along with (presumably) septic tanks and sewers.

But if we pause to reflect on Gandhi’s astonishment, we may begin to ask why is it that villagers have not been destroyed by epidemics in all these centuries of outdoor defecation? The answer may be quite simple actually. Human faeces emerge out of the body, separated from water (urine) by the body, and are then exposed to air and sunlight. These conditions permit the aerobic (with oxygen) decomposition of the faeces whereby dry faeces combines with oxygen to produce non-toxic oxides. But if faeces are transported underground – where conditions resemble the intestines – they would once again encounter water and be deprived of oxygen and sunlight.

Hence, anaerobic decomposition will produce toxic substances such as methane, hydrogen sulphide and ammonia. It will also provide a good habitat for all the disease-producing germs, all of which then flows into streams and rivers. And this is what eventually kills those unfortunate human beings who are lowered into sewers and septic tanks to clean them, as well as the multitude who have to drink the polluted water.

Climate change is the ‘new’ challenge thrown at us by this kind of ‘development’ where the solution is often worse than the problem. The prime minister has, of course, denied that climate change is a scientific possibility. But a National Action Plan for Climate Change exists and was announced ten years ago to “adapt to climate change and further enhance the ecological sustainability of India’s development path”, using “new and additional financial resources and climate-friendly technologies”.

But if we consider climate change within a frame of geological cycles, it took the Earth all of 60 million years of the Carboniferous Period to fix the carbon from the carbon dioxide in the atmosphere of that period into flora and fauna and then pressure cook them into all the known fossil fuels that we have today. If we unfix that carbon in the estimated 400 years it will take for the coal to be burnt up, then we are trapped between two processes with rates that are different by 150,000 times. Can adaptation, finance and technology match that rate of change?

However, if we consider that, for change to be kept within 2°C, the boundary condition is that per capita we should release less than 2.5 tonnes of carbon dioxide, while the global average was (in 2014) less than five tonnes, then we have to halve the energy consumption worldwide. Currently, the Indian average is about 1.7 tonnes while the Americans are top-of-the-heap at 16.5 tonnes (beaten only by the oil-rich Arabs). So, in factual terms, Indians are already exhibiting best practicewhile the Americans (from whom we expect finance and technology) are worst practice.

At the same time, in India, the wealthy are emitting at rates well above the average American and what keeps the national average down is the large number of people who live below the poverty line. Translated into actual lifestyles in India, by measuring carbon footprints, it can be shown that anyone who earns more than Rs 10,000 per month is exceeding the limit permitted by the Earth. In other words, those of us who do not live within that limit are all guilty of contributing to climate change.

Curiously, all the real practitioners of sustainable development, who live below the limit – fishermen, sewerage workers, small farmers, indigenous peoples, waste-pickers, Dalit manual scavengers, Muslim artisans, butchers, women, backward castes, Buddhists, Ramdasis, Kabirpanthis – have been relegated to the bottom of the Vedic hierarchy for centuries by the Code of Manu. The organic and natural division of labour was converted by Vedic theorists into an artificial and unnatural segregation that has remained rigid and unyielding over the course of generations. 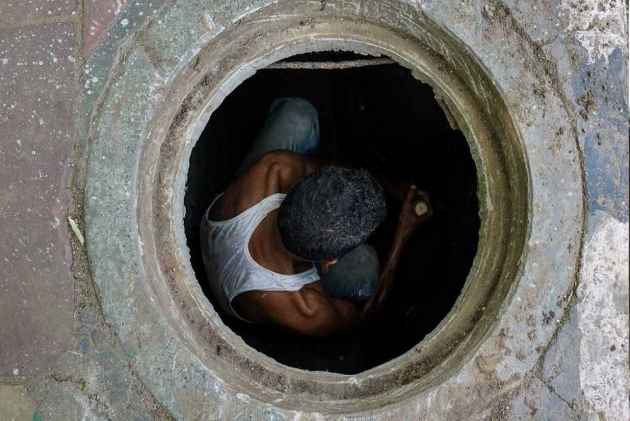 Is it any wonder, then, that of the five precepts taught by the rebel Buddha, two underlined the need to abstain from taking life and to abstain from taking what is not given? Two centuries later, the Mauryan emperor, Ashoka, developed the Buddha’s precepts further into 33 edicts, of which a few indicate the appreciation of limits in nature and society that need to be respected.

As Bhim Rao Ambedkar analysed long ago, the only escape for the Brahmins from their social and political decline under the Ashokan state was to usher in a counter-revolution. Thus, a century after Ashoka, Pushyamitra, Brahmin commander of the Mauryan army, assassinated the last of the Mauryas and initiated the Shunga dynasty with the aim “to destroy Buddhism as a state religion”. It was during his reign that the Manu Smriti was written codifying the laws of caste, and ever since the shudras, ati-shudras and mlechhas have been relegated to the lowest of the low.

Some parallels to the second century BC may be found in the present period when the abolition of caste and equality in law, offered however tentatively and tenuously by the constitution of independent India, is now sought to be subordinated once again by the forces of Hindutva. And this subordination is not only of the ‘lower’ castes but all other social forces considered to be antithetical to Brahminical Hinduism, from Christianity to Islam, from Bhakti to Sufi, from Dalits to feminists, from secularists to ‘urban Naxals’.